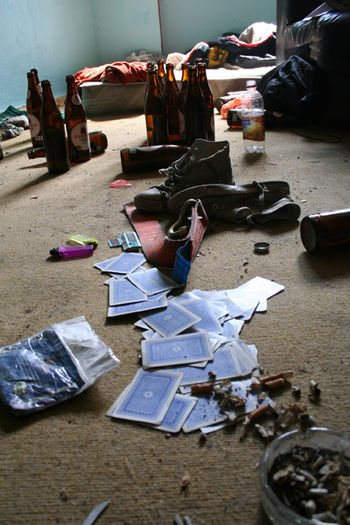 Some empty beer bottles waiting for being returned, Berlin.

Making money out of trash is also an opportunity. Below you can see (or contribute with) some most common ideas how to make money from trash.

In some countries (Germany and Holland for example) you can collect empty bottles in parks and from trash cans (or anywhere else you can find them) and bring them to the shop or supermarket where they give you money for these. In Germany (where they call empty bottles "pfandflaschen") all the beer bottles cost 8 (euro)cent, plastic bottles and cans can be 15 or 25 cent. In Holland one empty beer bottle costs 10 cents and big plastic bottles 25 cents. To find bottles try going inside the supermarkets and next to the bottle return machine there is a trash can normally. This very often contains bottles that cannot be exchanged at that supermarket but at other ones. This works well between Lidl, Aldi, Albert Heijn and Dirk.

In Scotland, ginger (soft drink) bottles from a company called Barrs come in glass bottles. These glass bottles can be returned to local shops for 30p.

In Belgium, must of the beer glass bottles (like the Chimay) can be returned. It is like 10cents/bottles.

In Germany they sometimes have Beer Festivals. You can very often find many beer glasses and jugs there - and for returning one beer glass you get 2 euros. On big rockfestivals with camp, like "Wacken" hard glass beerbottles are forbidden, so the people have to buy beer in cans. These cans (with 25 ct Pfand) there overall, and if you collect the cans, you can have 50 maybe 100€ in a hour.

In the U.S. Only a few states have bottle return laws, but if you are in one of those you can money for some types of discarded drink containers. This website shows how much deposit you can get back in each state that has a deposit law.

In countries like Germany, France and Spain (as well as many others), you can find some electronics, fix these (if you are able), and sell these in the flea market. Or anything else which you think you can sell.

In Spain you can sell some stuff in "Cash Converters", one second-hand shop chain.

Use Internet notice boards to sell dumpster dived and/or repaired stuff. In the U.S., Canada and growing parts of the world you can post free for sale ads of dumpster dived treasures on your local craigslist. Some clothes, furniture or books can be sold if you price them cheap-most people expect a really good deal if they are buying used.

It is also possible to find money, of course. On the streets or anywhere.

Also you can search for coins from parking machines, in the rejected coins slot.

In the UK many supermarkets have trolleys which require a £1 coin to be slotted in before the trolley can be used. Finding abandoned trollies and returning them allows you to recover the coin from the slot. Wet days are best when people can't be bothered getting soaked when returning the trollies.

Coins are also often found in and around the self service checkouts in supermarkets, where people have dropped small value coins as they put them in the slot.

If you find some old books, furniture and other really old or rare stuff you can either try to sell it yourself or sell everything to an an antiquary (you will get less money by selling your item to a middle man than if you have sold it yourself, but for that your chances to actually sell something might increase).

In urban areas you can ask people who are leaving the public transport for their tickets, which they don't need anymore. Most often the tickets remain valid for the rest of the day or at least some hours. Those tickets can then be sold under the market value to people who wish to buy one.

Note that many transport companies specifically don't allow reselling used tickets, even if they are still valid.

Some materials bring higher prices. A useful site for learning what types of electronics/electronic components are valuable and where to find them is here. Some printed circuit boards are valuable for their gold and other precious metal content.