In many countries you can find great furniture in the street. The more affluent the country or city, the more and nicer stuff you can find. The bigger the piece of furniture you find, however, the harder it is to move stuff. 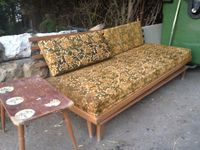 A couch and table on the sidewalk

Couches can be dirtier and might require special attention. Sometimes, when the glue that is used to attach the fabric to the padding in a piece of furniture gets wet, it releases odors (maybe the wet glue becomes food for various microscopic creatures that excrete odors or maybe it's just the wet glue that smells). So, a piece of furniture that you take off the street that doesn't smell bad initially might start to do so after a couple of weeks.

Pay special attention for signs of bedbugs or roaches, it is fairly easy to find photographs of what to look for inline. During a very cold winter, mattresses or furniture can be left outside in a covered area for a few days to kill such creatures.

Vacuum cleaners are often found thrown away, sometimes for good reason but other times simply because of a small clog the owner couldn't fix or a blown fuse. Sometimese ven because the person got a newer model and just waste fully disposed of the old one. Again, this is another item to be careful of as far as fleas, roaches, bedbugs that might have been vacuumed up.