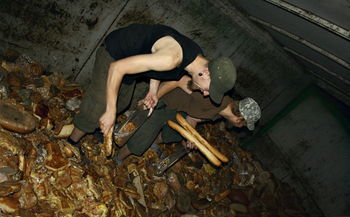 In a dumpster of Berlin's bread factory...

Berlin is the capital of Germany. It's pretty good for finding trash.

Picking discarded food at many markets is generally accepted, vendors are often sympathetic towards dumpster divers. At certain markets you might get less positive reactions. There are enough of the markets to choose from though.

Located on Kottbusser Damm. Opened on Tuesdays and Fridays, from 10 to 18.30. It is a medium sized market that provides average to good results for dumpster diving.

Yorckstrasse station (S1). Biggest Turkish market in Berlin for fruit and vegetables. Vendors sell whole crates of green/fruits for 1 euro at closing time. One can get food for free, too. Some 60% to 70% of this food is not of the greatest quality but you get a lot to select the best from. (Last checked: Aug.2009)

Located on the Reinickendorfer Straße. They sell other stuff besides fruit and vegetables. When asked they didn't seem all that comfortable giving away food but you could get some food they do not need if you ask very politely. * (add address and opening hours)

It's a little market but the sellers are really kind if asked nicely. Every Thursday from 12 to 19. (Last checked: August 2015) 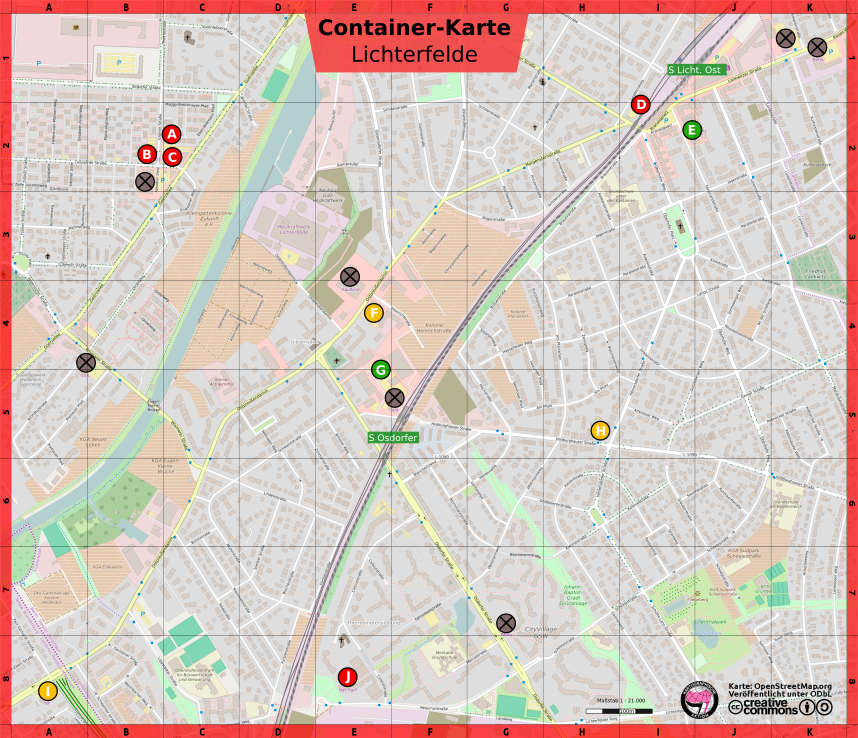 "Containern" is German for dumpster diving.

You have best chances of finding food when you dive in smaller, local supermarkets which are not part of greater chains - the latter ones give their food away to social help organizations, therefore there's rarely anything to be found in their containers.

Many supermarkets keep their bins either unaccessably inside or keep them outside closed off with a simple lock. Nonetheless, there are some places that work perfectly for dumpster diving, so don`t get discouraged. Supermarkets in Berlin are still really great for dumpster diving if you know where to go.

Many times has been confirmed that the Dog Netto (Scottie Netto, NOT Netto Marken-Diskount) are incredibly good generally. Most of them throw away a LOT of food almost daily. Often the bins are in cages which are locked but to fix that you can either lift the door up so it comes out of the hinges or glue the keyhole so that they stop locking it. If you glue the lock, try to glue it whilst the door is open. Not necessary but makes life easier for everyone. Both methods work great. At least two caged dumpsters have been liberated this way. Try to avoid being seen, and leave stuff tidy.

Some good spots are:

Note: be careful of the red loading gate by the office, located by the crates and palettes. It is motion sensitive and will open/pull up (and attract attention) when in close proximity.(Last checked: March 2018)

Check out the map at the bottom of the page for other exact locations.

1. The largest dumpster that any of us has ever seen was in Pankow, from a bread production factory. It is now a legend for dumpster divers coming to Berlin, but it's not possible to get anything there anymore, the only thing you'll achieve is getting asked to leave, ither from their workers or their (not englih-speaking) security guard.

Just past the gas station there is a drive-way leading behind the shopping center; once in there, turn right and look for the green bins. There should be three of them, one of them, closer to the back doors, is full of bread, a swimming pool of it. If the dumpster is closed, you can open it with the crank mechanism just near the bottom of it. You should close it when you're done. The factory runs during the day and the night, and they are told to tell us off if we come by, which they sometimes do. Be sure to bring a flashlight, and a friend, because sometimes you have to jump in and it can be difficult to get back out alone. Further, in the summer, there are wasps (sometimes), and there are sweets! So bring plastic because it can be sticky.

SHOCKING UPDATE: This baking factory seems to be now closed, or at least they removed all their accessible containers.

SHOCKING UPDATE P.S: If you go around the territory, you can find some other bins from other production there.

2. There are lots of bakeries in Berlin. Usual tactic to get a free bread is to go few minutes before closing time and ask (in German) if they have any leftovers they want to throw away. Closing times vary, with most bakeries closing between 17.00 and 22.00. You can also try to check the backyard of the bakery, where possible - sometimes they have bins full of bread there.

3. "Shell" petrol stations almost always have blue color dumpsters, with a bags full of bread, sandwiches and donuts. But take care that workers dont see you, they usually go aggro and want to call police.

"Volksküche," or "people's kitchen," describes a place where everyone is invited to cook and then eat together, either for free or very cheaply. A reliable list of Voküs can be found on the Stressfaktor website!

A freebox in Berlin (2005) serving as a distribution center for free donated stuff (clothes and such).

There are several give-away shops. Check Umsonstladen for more info. Please note that the one at Brunnenstraße 183 is now close indefinitely.

Berlin trash sorting is very special. Lately a large part of the apartment buildings in Berlin have gotten special bins for people to put useful things. These are called Orange Boxes, and they are orange colored. It's like having free shops everywhere! :) The kinds of stuff that can go in this bin range from clothes, electronics, furniture and other household things. Basically anything useful that people throw away tends to be in those bins. The most awesome kinds of stuff has been found there, including functionable laptops, typewriters, tennis rackets, sheepskins, printers, different clothes and shoes, paints. These bins get emptied every two weeks so check your local area to get an idea of the best days to go. Also some areas are likely to have more orange bins than others, depending on how rich they are. So far, Pankow, Prenzlauer Berg and Friedrichshain seem to have pretty good quality stuff. The area between Ubahn Osloer Strasse and Ubahn Gesundbrunnen is quite poor and not really worth dumpstering. It's sort of a good thing cause people don't waste so much around there. The best times to go diving for this kinds of stuff is between working hours/days cause that is when less people are around/at home seeing you. Best streets are the ones not on main roads because there are less people walking by.

To access these bins, you have to either get into courtyards or to get into bin cages. There are several ways to do that. Obviously, the best is when the doors are unlocked and you can just go in. But if they are not, you can do the following:

Jump inside the cage if possible.

Cages that have a handle on the inside: If they are really locked with a key that turns all the way then it's unlikely you can open it by these methods. But if the lock is one that just needs the handle to be pressed down, put your hand or some fingers through the bars and press the handle from the inside. Sometimes this handle is one that you can turn instead of pressing. If it's too hard to do that, and you have a pen knife with you or some metal object like a spoon handle, you can use that by putting it in between the door and the cage at the place where the lock is, and push the lock (to make the same effect that happens when the handle is pressed). Sometimes that is easier because the inside handle is out of reach.

Courtyards: A courtyard might have several building doors that it can be accessed from. So if one is hard to open or in a main street where lots of people pass you might want to try the others. For example on a corner of a building, there are two entrances usually on the different intersecting streets. (IMPORTANT: Once inside the building, you usually have to get out of it to get to the courtyard. There will be another door, the one leading to the courtyard. Sometimes this door will open from inside the building but the handle on the other side will not open it. For this you should put something to keep the door from closing whilst you are dumpstering or you might get locked inside the courtyard. One time this happened and there was a particularly nasty old lady who told diver Smaua to get out the same way she came in. ALWAYS check that you can get back out easily. :) These doors can be also carded sometimes but not always so it's easier to not let them close!

Carding: To get into courtyards, you can card most building doors, go through the building and reach the courtyard. Especially the old Berlin buildings with big heavy wooden doors. But new doors work too, and gates also. The doors are not locked by turning the key all the way but just by the handle release, just like the bin cages. To easily open them, you need something like a plastic card. Bendy but not too bendy. The longer the better cause it has to go in quite a bit. Old folders can be used to make a nice shape. Also tupperware lids. The material has to be thin enough to get in between the door and the lock. The shape of the material should be rounded off at one side so that it's easy to turn and slide around. Something shaped like this black piece of material works well. Feel free to experiment and edit this info.

Carding the old doors: The easiest doors (old wooden ones) can be opened by just sliding the plastic in at the level that the handlebar is at on the other side, and pushing inside whilst(at the same time) kind of jiggling or pushing the door with your foot. This is incredibly easy to do and works on most doors. Usually the space in between the door and the lock is very big on the old doors.

Carding the new doors: For other kinds of doors it's better to slide the plastic in (as much as 15 or 20cm if you can) a little above the handlebar and slide it down towards the lock, at a kind of sharp angle. Do this whilst jiggling the door with your foot. You can also open it by sliding the plastic from the bottom up. Depends on the type of door and the space in between the door and the lock. the thinner your plastic the better. Most doors can be opened like this even though there are some kinds where there is not enough space for the card to slide around easily so those cannot be opened.

Ring the buzzer: Sometimes one of the doorbells for the building is a company, business or a practice (doctor, dentist). Sometimes ringing those doorbells automatically opens the door. Other times you have to wait a bit and they open the door for you like for a client. You can also ring other doorbells and depending on your German level say that you are delivering advertising (Verbung) or just hope they don't ask who it is and just buzz you in.

EXTRA TIP: When travelling and end up spending the night in cities without a host, it can also be useful to get into buildings/courtyards in case there is rain and you need a safe/dry place to sleep. Try to access the roofs if you can, that might be cool too.

There's a wide collection of websites for offering free stuff: