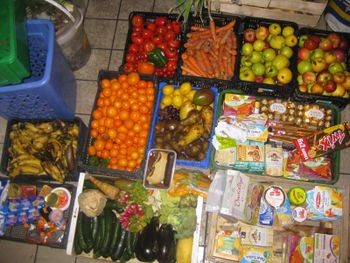 One evening's catch from a Spar and a Lidl in Lyon.

Note that it is always better to go to the smallest ones with normal bins because others (big ones) have their own compacktors which is usually locked and spoil the food.

Garbage collecting is usually once a week in medium/small size areas, most of the places do take their garbages out the night before those specific days so it is useful to know about it. In big cities, busy places, garbage can be collected every day.

French bakeries are by law prohibited from selling bread that is older than a day, so it pays to go around bakeries (boulangerie) and asking for old bread, or simply checking bakeries' doors/backyards after they close. Sometimes they will tell you they donate the old bread to organisations and that's why they don't give you. In a specific case they were lying, dumpster was full or bread and cakes in the morning. Old bread can easily be given away to people with cattle, hens (they can give you eggs then), rabbits, it is better to ask before feeding animals as most of them can get sick because of bread. It is good as well to share with wild birds in winter time.

Check as well butchers, with some bones or left overs you can feed cats/dogs or just leave it in the woods from time to time (not too often and not in the same wood/forest) or in an empty field for birds of prey (winter and mating season).

For flower-lovers, most of garden centers will not only throw a lot of plants (loads of orchids, bulbs, Yuccas,...) but fantastic other things you can't imagine (especialy during or shortly after xmas time). One good thing is the hay-ground corn stems mix they use to keep rabbits,hamster,... (you can find a lot) can actually be used in your garden as compost.

For trash other than food, France has collecting and recycling sites in every town, at least one. Look for "dechetterie" usually a green sign.

It's good to know a bit of French as like in any other other non native english speaking countries in europe (except Germany, Neederland, Scandinavia) people over 50 in France do not speak English (more in the countryside). You are more likely to go skipping with young people so they will have a minimum of english. One has to understand that dumpsterdiving related activities are not the kind of things and vocabulary they teach at school.

The good thing is people do not really care and it is not badly - nor well either - considered to check the bins if they are in a public area (the street). However mind the police, they can be nosy enough to get you into trouble: so bringing your ID with you is a good idea, they will just check it out and if everything is in order and you keep quiet will let you go without any problem (they do not like the smell of alcohol though). If they ask just tell them the truth about garbage they can't do anything about it. The most important hing is to stay discreet and try keep low profile: always think there are other people looking for trash.

Dumpster diving is not illegal in France. Though people might tell you it is, because they just assume so. And you can't just shut them up by quoting the law, because the law is not specific. However, precedents have consistently considered that trash has no owner, which according to Article 713 of the Civil Code, default to be owned by the local administration (fr: Commune).

Less shopkeepers/supermarket pour chemicals over their garbages because it is forbidden by law to put strong toxic chemicals in normal bins (bleech, acid,...) altough it is not really clear so people can still do it. Most of them now will prefer flour (which is ok) or washing liquid (which ruins everything it touches).

In certain parts of France, a new system is being implemented which is based on real garbage weight secure by a magnet lock system: bins/containers in those areas will be locked.

Some websites are trying to organize a "giving instead of throwing stuff" network, there you can publish what you're giving and browse what people give away: