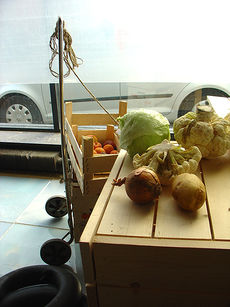 The Netherlands are fairly good for dumpster diving, as well as for other freegan means. Like many Northern European countries it's an affluent country and people throw away lots of very usable stuff. Beachcombing used to be very common in the past.

(For more info on each city or town in the Netherlands see template at the bottom of this page.)

In the Netherlands dumpster diving is a gray area. The owner has disposed of the goods, therefore making it free to anyone to take it. However, it may also be considered as being still property of the owner. The garbage company in charge of picking up the garbage will become the keeper of the garbage until it has been destructed. In addition, when an area is closed for public it is illegal to take garbage from the containers or from the property.

Every year on the 27th of April (Koningsdag) the Dutch flog their trash on the street. At the end of the day, in the bigger cities, some people leave their unsold trash lying on the pavement.

The Netherlands seems to be quite good for getting things for free; as most banks do free coffees, and the 'Lefier' (jobcentre) often has free coffee, chocolates and mints! Also make sure to check out some bigger supermarkets like Jumbo, Albert Heijn, Super de Boer. Those are the places to get free coffee and tea from the coffee machine located somewhere in the store.

"By far the nicest thing I discovered in the Netherlands (regarding good free food) was a special thing of the supermarket "Jumbo". Not only they have a lot of biological food and tofu products, they also give away (for free) produce that runs out of date that very same day or the day after: milk, fish, fresh pizzas..." (User:Regen)