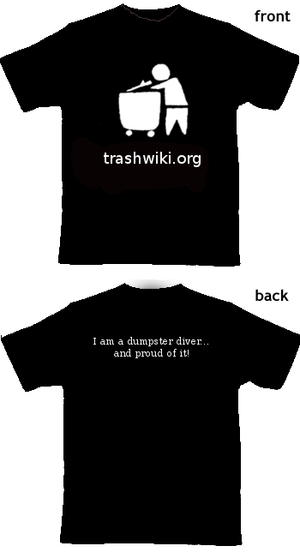 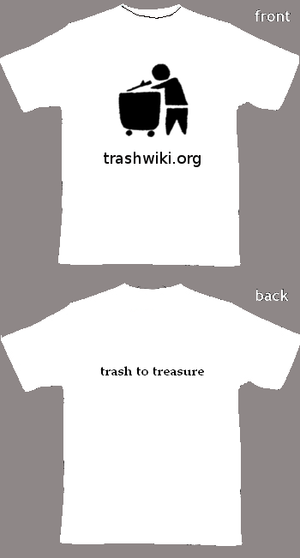 Just an idea: maybe it would be nice to make and distribute Trashwiki T-shirts? Maybe we could open a Trashwiki Fund, create a PayPal account and sell T-Shirts? The money could pay off the server and domain costs, and it is a good advertisement for this project. It is just an idea that popped in my head now, I have never done anything like that before though. --Sigurdas 17:14, 15 March 2009 (UTC)

Mixed feelings on this one. Nice designs and in some ways a great idea. But also kind of encouraging consumerism - elitist fashionista consumerism at that! Maybe if they were stenciled onto dumpstered t-shirts? Ah, screw it! I'd probably wear one. The 'trash to treasure' one is really cool.Luna1 23:38, 16 May 2009 (UTC)

To avoid typical consumerism, I would recommend everyone to do prints on old/found T-shirts (recycled) like http://www.iloverecycling.org does for example. DIY prints are not hard to do actually: just need some time to draw and cut out the logo/letters on a hard paper, buy (unfortunately) paint for fabric, paint the T-shirt, and iron the print from the other side after some time (before the wash).
However, if we DO have trashwiki merchandize in future, I don't think we will ever make any profit from that, nor it is a goal of any Trashwiki founders, as I would guess - but simply to pay the server costs and such would be nice... Ah, I don't know! :) --Sigurdas 22:18, 17 May 2009 (UTC)

No worries! Server costs and domain name costs are not worth mentioning compared to the value I got from dumpster diving! guaka 23:14, 17 May 2009 (UTC)

Robin wants to set up a Dutch foundation for a couple of things, Trashwiki could be part of that and I'm sure the foundation will pull in enough donations to cover all costs once it's actually set up :) guaka 07:13, 18 May 2009 (UTC)

I've been following casarobino.org recently - there's some amazing stuff Robin and all of you have going on there. Very inspirational! I got here from there...and a few other places.Luna1 05:51, 19 May 2009 (UTC)