Zagreb is the capital and the biggest city of Croatia. 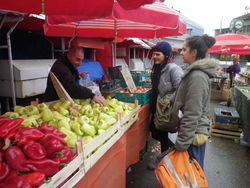 Green markets in Zagreb work almost every day (if not every). They close around 3.30-4 p.m. Try asking people for stuff they plan to throw away, usually they are happy to give. Also, there's always some loose fruit and vegetables on the floor which you can pick up. Green markets around the center are:

There's a lot more - here's a site with the map, it's in Croatian, but at least you can see the location and working hours. TržniceZagreb

Most luck is with Konzum dumpsters, some have bigger bio dumpsters (which are unfortunately emptied only once or twice a week), while others have the small green bins and the trash might not be separated. 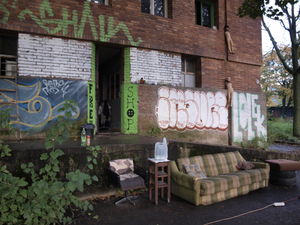 There is a Freeshop open all the time in Heinzelova 66, as well as an anarchist library - part of Reci:Klaonica collective. The idea of the place is like anywhere else - take it and/or leave it. It's mostly clothes, but also all sorts of thingies, from condoms and books to audio cassettes and car speakers. The door are a bit hard to open, just be brave. The same lovely anarchists sometimes hold workshops (like juggling every Wednesday 19:03-22:06h) and there is a music studio for all the kids with dreams and no money. 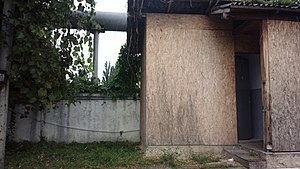 The fence that separates freeshop ReciKlaonica in Zagreb from Radnička cesta

When you ask around for Heinzelova 66 you will be most likely directed to Zagreb's Vet Faculty. From there one can see something similar to Klaonica but when you look around for the entrance it is a bit hard to find as the area is pretty much fenced. Before you go there look for directions on their homepage but don't use the green way which instructs you to jump over the fence, because it's dangerous. If you use the green way you will most likely end up on Radnička road because the fence has thorns and barbed wire. However you can still find a small section of fence without barbed wire which is possible to be jumped over but still can be pretty unpleasant as there are thorns on the ground just by the fence on the other side. So, the other way from the Konzum market is better choice.

Every Thursday from 5-8 p.m. a group of young bicycle enthusiasts gather in Frankopanska 1 where they hold a free, open-to-everybody repair-shop. Unlike a regular bike-service, this place offers advice and tools to help you mend your bike by yourself. The atmosphere is very jolly of course. For further information, this their site Biciklopopravljaona.

Street-diving Two or three times a year, people throw their unwanted stuff outside on the street and it is free for anybody to take. Things such as old beds, books, washing machines, bathtubs, clothes, tires, desks and chairs are very common. Such piles of trash can be found in every neighbourhood. The exact dates vary, but are generally between the middle of February till the beginning of March, and in the summer they are between the end of July untill the middle of August. Each neighbourhood has its own date which can be checked at the Croatian public garbage disposal service page.

Flea market Every Wednesday and Sunday there is a flea market Hrelić. You can find anything you think of. People start gathering early in the morning, from dawn till around 13,14 or later. Many people leave unsold stuff laying around. To get there take trams 6, 7 or 8, get off at "Most Mladosti" and follow the stream of people going east by the river bank.