From Trashwiki.org
(Redirected from Wild foraging)
Jump to: navigation, search 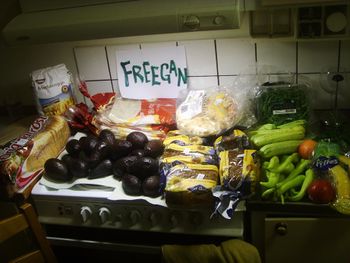 Freeganism is an anti-consumerist lifestyle whereby people employ alternative living strategies based on "limited participation in the conventional economy and minimal consumption of resources. Freegans embrace community, generosity, social concern, freedom, cooperation, and sharing in opposition to a society based on materialism, moral apathy, competition, conformity, and greed." Many editors of Trashwiki consider themselves freegan.

The lifestyle involves salvaging discarded, unspoiled food from supermarket dumpsters that have passed their display date but haven't passed their edible date. They salvage the food not because they are poor or homeless, but as a political statement. "These people don‘t eat out of dumpsters because they‘re poor and desperate. They do it to prove a political point. You wouldn‘t expect someone to choose a lifestyle that involved eating out of dumpsters. Kind of seems like something you do as a desperate last resort. But there‘s an entire society of people who willingly get their meals out of the garbage. They‘re called freegans, and they say they have a reason for doing it."

The word "freegan" is a blend of "free" and "vegan". Freeganism started in the mid 1990s, out of the antiglobalization and environmentalist movements. Groups such as Food Not Bombs served free vegetarian and vegan food that was salvaged from food market trash by dumpster diving. The movement also has elements of Diggers, an anarchist street theater group based in Haight-Ashbury in San Francisco in the 1960s, that gave away rescued food.

Even the manifesto pamphlet "Why Freegan" (written by Against Me! drummer Warren Oakes in 1999) is unclear in its definition of what constitutes freeganism. At one point, it defines freeganism as "an anti-consumeristic ethic about eating" but goes on to describe practices including dumpster diving, plate scraping, wild foraging, gardening, shoplifting, employee scams, and barter as alternatives to paying for food. Motivations are varied and numerous; some adhere to freeganism for environmental reasons, some for religious reasons and others embrace the philosophy as a form of political consciousness. A short documentary film, Bin Appetit, gives reasons why people become freegans.

The pamphlet does include a lengthy section on non-food related practices, including solar energy, conserving water, carelessness, precycling and reusing goods. Some freegans consider these non-food practices to be components of freeganism itself; others simply consider them to be complementary practices. 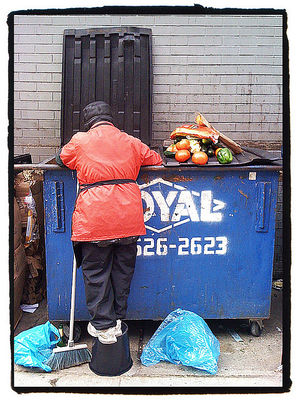 Many freegans get free food by pulling it out of the trash, a practice commonly nicknamed dumpster diving in North America and skipping or bin diving in the UK, as well as bin raiding. Freegans find food in the garbage of restaurants, supermarkets, and other food related industries, which they claim allows them to avoid spending money on products that exploit the world's resources, contribute to urban sprawl, treat workers unfairly, or disregard animal rights. By foraging, they believe they are keeping perfectly edible food from adding to landfill clutter and that can feed people and animals who might otherwise go hungry.

Instead of buying industrially grown foods, wild foragers find and harvest food and medicinal plants growing in their own communities. Some freegans participate in "Guerrilla" or "Community" Gardens, with the stated aim of rebuilding community and reclaiming the capacity to grow one's own food. In order to fertilise those guerilla gardens, food obtained from dumpster diving is sometimes also reused. In many urban guerilla gardens, vermiculture is used instead of ordinary composting techniques in order to keep the required infrastructure/room small. Guerilla gardeners claim to seek an alternative to dependence and participation in what they perceive as an exploitative and ecologically destructive system of global, industrialized corporate food production.

Sharing is also a common freegan practice. Food Not Bombs recovers food that would otherwise go to waste to serve warm meals on the street to anyone who wants them. The group promotes an ethic of sharing and community, while working to show what they consider to be the injustice of a society in which they claim fighting wars is considered a higher priority than feeding the hungry.

Really, Really Free Markets are free social events in which freegans can share goods instead of discarding them, share skills, give presents and eat food. A free store is a temporary market where people exchange goods and services outside of a money-based economy.

Freegans also advocate sharing travel resources. Internet-based ridesharing reduces but does not eliminate use of cars and all the related resources needed to maintain and operate them.

Community Bike Programs and Bike Collectives facilitate community sharing of bicycles, restore found and broken bikes, and teach people how to do their own bike repairs. In the process they build a culture of skill and resource sharing, reuse wasted bikes and bike parts, and create greater access to environmentally friendly transportation.

Freegans believe that even if a product is vegan, it does not guarantee that:

Freegans claim that people sincerely committed to living the "cruelty-free" lifestyle espoused by vegans must strive to abstain not only from eating, wearing, and using animal skins, secretions (e.g. milk and its by-products), flesh, and animal-tested products, but must attempt to remove themselves from participation in the capitalist economy altogether as workers and consumers.

Some freegans, sometimes called "meagans", consume meat and other animal products only as long as they would otherwise be wasted.