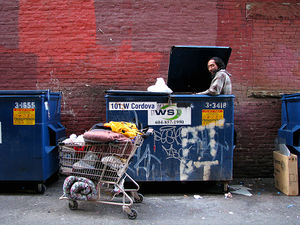 Alphonse doing some garbage bin diving in Vancouver, searching out any items which may bring him some spare change.

Vancouver in British Columbia, Canada, has one of the mildest year round climates in Canada, and a ton of good places to dumpster dive. The downside is that there is a lot of competition in dumpstering in this city.

Good neighbourhoods to look in Vancouver are: