Toulouse is a city in the South West of France.

The non-recycling trash in Toulouse is in grey bins with green lids. Trash collection in the center is done 6 or 7 days a week. In the other areas (sectors) it is done 3 times a week. Sometimes the days of collection are written on the side or on top of the dumpsters in permanent marker, so check it out. If you can't figure the days out like that then you can call 3101 to ask for information. Hopefully be able to speak some French and tell them you just moved in. Generally dumpsters are either always out on the street or they are taken out in the evening after the shop closes.

You can always find veggies at the end of food markets. Vendors usually start packing up around 12 pm - 1 pm.

France is heaven for that. 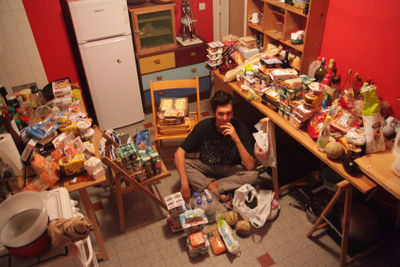 Everything here comes from one dumpster trip to 3 small supermarkets located on Avenue de Muret in Toulouse.

A lot of the Petit Casino's in Toulouse seem to have a habit of throwing more stuff away than they sell. Just find your nearest and check it out. "Shopping" in little shops works superbly in the suburbs and not that well in the centre.

Here is a hopefully productive cycling-route for dumpstering the east of the city, trying to avoid the hills: http://g.co/maps/rxrsd - just keep your eyes open for other supermarkets along the way as there are more places than just those marked on the map. Go after closing time.

In Labège, behind the Carrefour on the FNAC side there are old screens (for recycling) left by the people buying new ones. Preferably on Saturdays.