The Ten Katestraat market in Amsterdam gives mixed results for dumpster diving. guaka thinks it's totally great. Paxus thinks it is quite okay.

How to get there

You can get there by taking the 12, 13 or 14 tram and getting off at the Elisabeth Wolffstraat, or 7 and 17 to Ten Katestraat (or if you dont want to take the tram, you can at least use the tram maps all over the city or the OSM and GVB maps to find out where this place is). Turn left onto Elisabeth Wolffstraat after getting off the tram coming from the Amsterdam Central station and walk down it until it veers slightly to the right and this is Bellemystraat walk another block and you will hit Ten Katestraat and the market is on it.

Time to get there

Best to arrive around 4:15 in the afternoon, the market closes at 5 pm, but if you arrive after 5:15 almost always everything is gone. it is open Monday thru Saturday. Monday is a half day and not all the vendors come.

What to look for 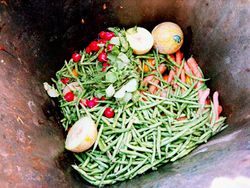 Contents of a dumpster at Ten Katemarkt.

There are blue and green plastic dumpsters on wheels where the produce from the markets is thrown out. These are roughly square, about a 1.3 meters high and 70 cm x 70 cm square at the top. Often three of them are collected at the corner of Bellemystraat and Ten Katestraat, but they are also sometimes scattered up and down Bellemystraat. Produce tends to be pilled all in four or five dumpsters thru out the Market.

So if you open a blue dumpster and don't find anything edible at the top, you could just move on to another one, but guaka has often found lots of stuff hidden below. Bring a bottle of water so you can wash your hands afterwards.

At closing time, when vendors fill their trash bins they are brought to a trash station located on the east side of the market street about half way through the market. The entrance is no different than any typical shop entrance, it doesn't seem obvious that all the trash is being brought here (compared to other markets where trash is just piled on a corner), so you will have to seek this out. There are compactors for most recycling items and trash, and at closing time many vendors just leave their bins and trash around the trash area instead of in it because of the large amount of volume the machine has to process; you may find many things in here at this time.

At the corner of Bellemystraat and Bellemyplien at about 5PM all the blue dumpster bins (about 8) were gathered and up into a truck. The guy loading them into the truck, seemed to have no concern about us diving into bins immediately before he put them in the truck. This does not happen everyday, in fact it has only happened one in four times we have gone, but when it does happen it is the best concentration and lowest vendor upset location. {Hey let's insert a map between the tram stop and the market with this important point marked - and i want to start discussions about specific vendors.}

Some vendors are not especially happy to give away food, though some others are totally okay with it and if you ask politely you might find yourself getting totally perfect food directly from their stand.

Once on a Monday afternoon guaka heard the Moroccan vendors shouting "gratis, gratis" and giving away all the food that was left on their stand.

Only one vendor objected people going through the blue dumpster.

Amylin recommends having a short conversation with the Moroccan vendors in Moroccan-dialect Arabic, and they will be totally friendly and give you tons of food and gifts.

There are occassionally local homeless folx/poor people going thru these dumpsters also, be generous with them (this typically means moving away from the dumpsters so they have access) and respectful of their needs, which are likely greater than yours. Most days however, there is no one ele looking through these dumpsters other than us. 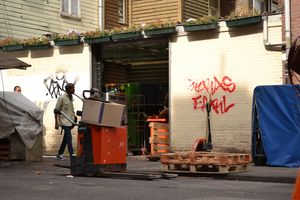 Kristina94 was there before 5pm and found a garage door with food grinder and dumpsters inside. We asked a vendor if we could go inside and take some thrown out stuff. He was very nice and let us in. Inside were several dumpsters loaded with fruits and veggies, lots of them still nice and fresh (see on pictures). We packed it to boxes and carry outside. People were stopping by and asking what´s happening there so we spontaneously organized a public food sharing, it was great :) 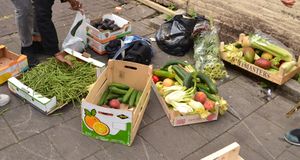 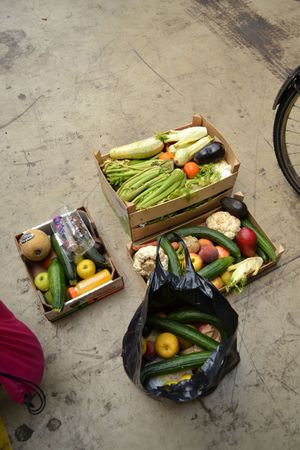 On Nov 18, 2008 Stove and Paxus went around 4:45 and got called away by one vendor around at in front of 30 Ten Katestraat approximately. We got tomatoes, grapes, bananas. green beans, eggplant, a couple avocados, cantaloupes. There was abundant food, we left huge amounts of fine stuff behind.

On Nov 20, 2008 Sierra, Derick and Paxus went too close to 5 PM and missed most stuff. We got a small haul of tomatoes, oranges, cucumbers, pears and a pepper. The dumpsters were not centralized today, so we had to go to all the vendor areas where they were cleaning up. 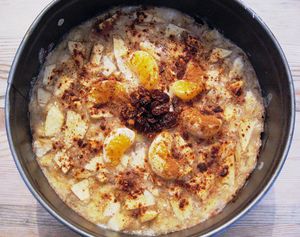 On Nov 21, 2008 Sierra, Dennis Collective, Topher and Paxus went around 4;45 but most vendors had broken down early. We got a small haul of tomatoes, peppers, pineapples, avocados, oranges and an apple. But much of it was bad. The vendors at the food stand near the large interection with the tram were asked if we could take food and they said "not now". But it started to snow, so we did not wait for later.

On Nov 24, 2008 Sierra, Dennis Collective, Topher, Anu (yeah!) and Paxus went around 4:30. It was monday, many of the best vendors were not there. We asked the vendors at the tram end of the market and the two at the end and on the stret with the tram both said "no". Also around 34 Het Katestraat on vendor was quite generous with Sierrra (tho has shoed Paxus away at another time) and they got grapes, avocados, citrus, avocados and a pineapple, green peppers. However we asked the only food vendor across the street just as they were taking out the produce in a dumpster and they gave us bananas, tomatoes, lemons, oranges and tangerines. . The vendor who gave us the food, said his boss would not permit this, but he did. Anu took some pictures of the market, which will be up soon.

On Nov 26, 2008 Kardan, Sarah and Paxus and Amylin all walked and probably got there a bit late like 4:45. There was no concentration of dumpsters at Bellemy and Bellemy. Amylin spoke Moroccan-dialect Arabic to several vendors who were very generous and we got 2 big heads of cauliflower, (lots of) bananas, leeks (gift), tomatoes, (lots of) apples, grapes, pineapples, pears, peppers, (lots of) oranges, and mangos. The vendors are Moroccon and quiet friendly when approached in their language and with a big smile. The central place where cartons and crates get compressed was no success this time. I was sent away, although it worked two times before to get much there. We asked the vendor at the fruit stand directly next to it on the right. He was busy and told us to wait. Finally he gave us a whole crate of grapes.

On Nov 27, 2008 Kardan, Sarah and Paxus and Willow (6) There was 2 dumpsters tide together on a palatte at Bellemy. peppers, avocados, oranges, pears, tomatoes, kiwi, mushrooms, bananas. Perhaps the most important thing for vendor relationships was when carting the two tied dumpsters over the curb they started to fall and we rushed in and helped him. he recognized us from previous days dumpstering and smiled.

On Dec 3, 2008 Rene and Amylin went a bit late. Many of Amylin's favorite Moroccan venders weren't present. Nevertheless, they collected: several melons (melão), pineapple, apples, oranges, grapes, bananas, pears, A LOT of tomatoes, and a large cucumber. There was one white Eastern European-looking (and definitely "foreigner") seller who said that if we came earlier in his shift, he would save stuff for us! How nice.

On Dec 24, 2008 Ethan biked there late and was there by 1700. Especially late today as it seemed like this place was also closing earlier because of the state-mandated holiday. There wasn't that much around the vendor areas at this point worth taking, but after discovering the trash processing area (see above) found lots of stuff in there. Bins filled entirely with celery, over 30 pineapples (only took 4, they're heavy!), some melons, lots of garlic and oranges, and a cauliflower.

On 14 April, 2011 Robino went there with Benjamin and Rachel. They found lots of great food in the recycling center, aubergines, fresh oregano, strawberries and red peppers. The market now has new containers in the recylcing center where they keep all the organic trash. These huge containers are emptied only a couple of times a week, so you can always find left-over food in there. The center, located in the middle of the market, is open from 13:30 to 17:30. The market is finally getting more popular for diving and quite regularly you'll meet other people there. The people working there are often quite nice.