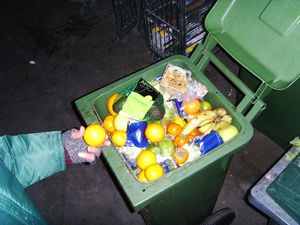 One can be really picky while "diving" for food in places like this: you just take the best, the rest either goes to landfill or to some other freegans' homes.

Sweden is one of the wealthiest countries in the world, and it is no wonder that you can get basically everything there without paying anything. Even though dumpster diving in Sweden is less possible that in countries like United Kingdom, Germany and Denmark, it is still doable if you know right places and right time to come to a dumpster. Some succesfull divers manage to get most of their meals from dumpsters.

Besides dumpster diving, wild foraging is a great source of food even for those living in cities, as well as eco-events with their clothing/stuff swaps are a great way to get rid of old stuff while gaining some new one.

One of the greatest providers of stuff like furniture, clothes, appliances, etc. is a waste room called "Grovsoprum" in Swedish.

Clothes, books and some other items as well as hairdresser service can be provided for free during the Market Days organized by local Really Really Free Market movement activists - actually, you can organize such event yourself!

For more exact information on every city and town see template at the bottom of the page.

Those who live in apartments in Swedish cities often have a chance to sort out all of their trash. A good municipal solution to this is a so called grovsoprum - these are waste rooms where you leave all the things that are too big for usual trash bins (there are also containers for recycled things like glass, metal, paper, plastic, and various packages). Even though recycling-stuff containers do not attract freegans, other stuff being put in these rooms often is quite valuable as it can include different electronics (often still working), clothes, sheets, pillows, blankets, furniture, books, etc. - basically everything what people have in apartments. If you are lucky you might find, for example, a laptop still in working condition. It is not only about bulky or high-tech items, though, - if you are in need for AA or AAA batteries, for instance, and you have an access to a good grovsoprum, just go down there and check thrown away remote controls and other similar devices - they often contain good batteries.

Swedes, as well as Finns, Norwegians and Danes, throw away a lot. Nonetheless, to take stuff from a grovsoprum is officially prohibited, although it is not known if anyone ever got in trouble because of taking something from there. Another thing, though, is that a grovsoprum is always locked, and only people who live in nearby houses can unlock the door. Therefore, it is possible to get there if you yourself live around in one of the apartments, or you have friends living there who can provide you with an access to grovsoprum.

You have good chances of finding quite nice food in the dumpsters of petrol stations along the smaller roads (the E4 is not a good bet for this). Supermarkets are hard to dumpsterdive in Sweden.

It is not entirely clear what the Swedish legislation says about dumpster diving practice. Some sources say you are allowed to take the content of a dumpster if it is not locked or if you do not have to violate the trespassing law (according to Swedish police, see reference; see also Stockholm City paper, choose 2009-06-01). Other sources say taking food waste from a container is seen as theft or shoplifting (according to Sven Lundgren, lawyer for Avfall Sverige (Swedish Waste Management), see reference). Although police in Sweden upon seeing you dumpster diving might simply check your ID and let you go (as in this case for example), there is at least one case of an arrest when two youngsters were arrested for dumpster diving in Umeå in January 2011 - they were suspected in an arbitrary act (egenmäktigt förfarande, see reference), which has little to do with the definition of theft: essential difference is that theft involves financial loss for those who have lost something, while an arbitrary act is to take something that does not involve financial loss (see more details at lawline.se, as well as blog post here). (It is not clear though how did it end for those youngsters.) In yet another case (see link) some divers in Dalarna region were caught by police and kept the whole night at the police station but released in the morning without any fine - police conclusion following lawyer consultation was that there was no real legal reason to arrest those who take a simple garbage (BUT only in case if waste is in the area which is accessible for everyone (i.e. no fence)).

Although climbing over a fence to reach an unlocked container would be considered a trespassing law violation, to take the contents of an unlocked container on the street does not imply same regulations. In other words, if you come from a perspective that a dumpster has an owner and the trash in the dumpster is owned by this owner, then theoretically it can be seen as some sort of law violation, even if it is not a theft, however, the status of the discarded goods is under question and barely has any real legal regulation, i.e. there are no specific laws about whether it is right or wrong to take what the owner has thrown away, which means that taking discarded vegetables from a supermarket dumpster can be seen pretty much equal to collecting cans from regular street trash cans. Such view is also confirmed by another case (see reference) when it went all the way up to a national investigation which in absence of existing laws concluded that the mere action of taking discarded goods from a waste container (which is not behind the fence or locked) can not be called a theft because 1) a product in question has no economic value on the legal market, 2) a product in question was permanently left without an intention for further use.

Beware of "Lidl": there was a case when "Lidl" employees poured a corrosive liquid, the equivalent of chlorine, on food that would be discarded, in order to keep homeless people away from dumpster diving (this case was filed for police investigation, and the managing director of Lidl Sweden called the incident "extremely regrettable").

A short documentary with an interview in Swedish/English with a dumpster diver in Sweden:

In this amateur film one can see how a freegan in Stockholm found food for 440 USD:

More pictures can be found under Category:Sweden.

Some cities have activists freeshops where one can take or swap different items. If you live in a place where there are no freeshops, you can organize it yourself: for example, you can throw a swap party at your place! Some places like Stockholm have quite a few such "Really really free market" (RRFM) activists who once in a while organize so called "market days" where various goods and services (wanna cut your hair? etc.) are provided for free to anyone who needs it. It is based on clothing (and other items) swap - you bring something you got tired of and you give it away to those who want it, and you take someone's something else you got excited about. Such a sharing event can be organized by anyone and anytime. 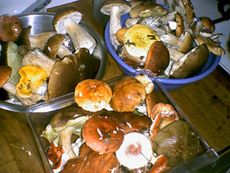 Mushrooms picked in the forests around Stockholm.

Most of the Swedish territory is a forest. The forest is very rich in food edible for humans. Even bigger cities like Stockholm are surrounded by such forest - it might take you just 10 minutes of a bike ride to get to the forest where in the season you can find plenty of edible herbs, berries, and mushrooms. This treasure waits to be picked up: late spring, the summer and the first part of the autumn can give you plenty of natural, fresh and delicious vitamins and minerals - you just need to go out and pick it up.

One of the most common things to find are berries like blueberries, lingonberries, wild strawberries, raspberries. You can also find Elderberrys in many parts of the world which have purple berries that can be made into jam or syryp, a word of caution is that these berries need to be either cooked (as in jam or syrup making) or somehow pickled to break down a slightly emetic poison in them.

This is the list of edible mushrooms in Sweden. Note that some edible mushrooms look very similar to those which are poisonous - you can take a mushroom and taste a bit of it to make sure if it is edible - if there is a burning feeling in the mouth, don't take it. Otherwise, the rule is: if you don't know the mushroom, never take it.

In shady and damp places you can often find ground-elder (Aegopodium podagraria) growing as a weed. The tender leaves can be used as spinach.[1] You can also find horseradish growing wild. Stinging nettle (Urtica dioica) is a good source of vitamin C and makes a nice spring soup, but don't forget gloves when picking it. Garlic mustard is often found by the roadside, and its leaves can be eaten. Dandelion is also a nutritious and edible plant.

All links in Swedish unless noted otherwise.