Slovenia is a country in Central Europe. 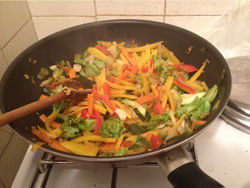 Slovenia has a law that forces supermarkets to dispose most or certain amounts of organic waste in a specific way, that is to either distribute it to pig farmers, or give away to homeless centers - that's why it is more likely that you will find food at food markets at the end of the day, than in the dumpster of a supermarket. Nonetheless, there are some reports that claim that some stores can provide you with sufficient amount of veggies and such, probably with some luck given. Smaller shops as well as bakeries tend to suit better for dumpster diving. But even without that, bread is ridiculously cheap. Most supermarkets have a few shelves with a 30-50% discount on nearly expired food.

"I am not sure about laws but you can definitely dumpster in this country. Only tried a small small town and two supermarkets. One Aldi and another. Both had things. Many fruit & veg and damaged products like opened box of chocolates, bread, etc. The state of the vegetables wasn't the best but still you will not go hungry in this country." - unknown user, June 2011.