Quebec is the capital of the province of Quebec, Canada. It is the second most populous city in Quebec after Montreal[1].

It is really easy to do dumpster dive when you're downtown. It is different from Montreal because there is less people doing it. Fortunately, people help and know each other so the dumpsters stay clean and there is no competition.

There is 3 places you are almost sure to find good and fresh food.

IGA on Chemin St-foy/Bourlamaque in Montcalm. This place is perfect for everyday dive. You will always find some vegetables and fruits, enough to live on for few days. There is two dumpsters, one contain most of the time fruits and vegetables (on your left) and the other one is for meet, fish and other trash (right). You will often find on place boxes to carry your food. 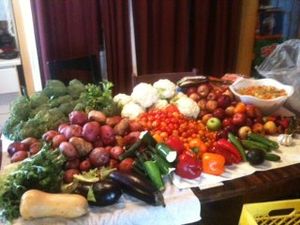 What you can usually find during the winter

Usually, you will get no trouble with the staff/owner or security if you go past midnight. Try to avoid going when it's daylight because some clients do complain and then the manager ask you to leave. During winter, there is a security staff in the parking lot, but he/she usually won't bother you.

Métro on Cartier avenue (you go to the back of the shop by Cremazie St.) in Montcalm. You will find pretty much the same goods than at IGA, but often more juice, milk and prepared meals. Sometimes the dumpster are locked with no way to get things out. There is some staff member who take their job too seriously and hate people who dumpster dive. Some might bully you or put bleach into the trash. Try to be quiet, since the neighbours have balconies into the alley and may complain. Please, be respectful. Later at night (11h00 PM) is better. (If you go alone there might be too much food to carry, at least it was for me. Loads of fancy yogourt. Last checked March 2014)

Allard street number 199, 2E Avenue in Limoilou. Allard is a distributor, so when you find something there is a lot of it. The shop is open 24/24, but try to go during the night. Normaly the staff won't bother you if you are searching inside the dumpster. The only thing that sucks is that they put everything in the same dumpster. You may find g-proc or a lot of shitty things in the dumpster. Take your time, nobody will bother you. Allard is an incredible place, but it's an hit or miss.

Les Halles de Ste-Foy on the crossing of Chemin des Quatre Bourgeois and Autorute Robert-Bourassa (across Laval Univeristy) has several bio-waste dumpsters on one side of the complex. It's easily acessible, diveable even before the sun sets. There's lots of bread, probably every day. (Possibly other stuff too, haven't had a chance to check it more than once.) Last checked March 2014

Freeganism is not a well known mouvement within the city. Living your life mostly for free, without properly "working", is usually a shame and people feel you're a parasite.

Hitchiking in Quebec city and around.

Train-hopping is possible to go east or west, but it is usually easier hitching if you want to stay within the province of Quebec. One of the best way to leave the city is to go at Shell on Laurier blvd where there's a lot of departure with amigo express and allo stop, two companies that hook up together drivers with empty cars and other folks that whant to go to the same place. They never have more than 4 persons in the car, so you can ask the drivers to help you cross the bridges and drop you to hitch hike.

What is awesome in downtown Quebec city (mostly St-Jean-Baptiste, St-Roch and St-Sauveur) is that there is always a construction dumpster nearby and you can mostly do everything by walking. You can get free construction material during the summer to improve your flat or build whatever you wants.

In the '90, Anarchist and Anarcho-punk were present downtown and were doing a lot of Food Not Bombs, but repression from the police and the city made them go away in the late '90s. Since the different past student strike (1996, 2005 and 2012), many collectives where born. Right now, there is 3 known active collectives who do dumpster diving and Food Not Bombs.

Collectif (A)toka is a Quebec city collective using an horizontal structure and that promote veganism. It asks for an autonomous common space within colleges and universities. The collective was founded by militants after the strike to keep a day each week to exchange on different subject while eating a good vegetarian meal. The good thing with those evening is that mostly everyone where cooking, so people learned how to cook or learned new recipes.

A food action group which distributes vegan and organic (when possible) food on a donate-what-you-can basis at Laval University. The objective of the collective is to promote food self-determination in a context in which the administration of Laval is transforming the university community into a market for sale to the highest bidder (Sodexo, Sobays). The collective is defined concretely through action; by offering a daily ecological, economic and social food alternative.[2] This collective was born during the 2005 student strike and was to fight against the monopoly of Sodexho for food service. 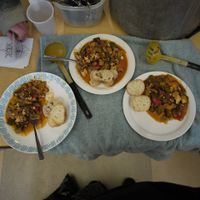 Café-Bar Coop l'AgitéE organize one time a week "La Boustifaille". It's located ont 251 Dorchester Blvd, and usualy the activity takes place on Tuesday. At the moment, it is quite inactive since everybody left the city during the summer.