Paris, France, is a great place to find random trash in the streets. After each market, everything what was not sold and isn't good for selling anymore is just disposed in original boxes, cardboard platter and packaging right on site. Plenty of food, half of it still good to consume.

Paris is an excellent place for dumpster diving. You don´t even need any exact addresses, just check your local supermarket, they take trash out different times, depending when the collectors come, but you can ask inside store or just pass by a few times to find out the time. Check out supermarkets like Franprix or Monoprix. If you want something more fancy check the dumpsters of your local Naturalia, all is organic and you can get packed tofu or peanutbutter spread :). Just careful, sometimes there are already people coming for some time and they might be hostile to newcomers. 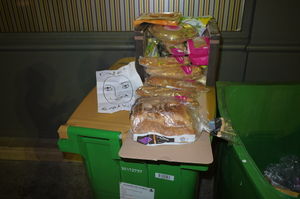