Munich is a rich city in Bavaria, in the south of Germany. 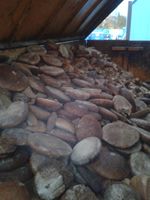 According to the locals, dumpster diving (German "containern") in Munich is possible and being not a very popular practice among those living in Munich it leaves a lot of trash for you to pick up.

There is a nice, really big REWE at Laimer Platz which separates it's trash usually really conveniently into meat, vegetables, and others. The vegetables are mostly on trays still, so still clean. Only some are in the dumpster with the dairy products. So it's very suitable also for strict vegan. On the other side of the street, there is a Vitalia Reformhaus, which has also a Bio-dumpster. Of course there are tons more of that one. For further informations on the dumpsters.

In Neuhausen and Schwabing there is a local dumpster diving group. If you are interested in joining, contact: bartoschrippstein (at) yahoo . de