Melbourne in Victoria, Australia, has some good places for dumpster diving as well as other opportunities for freegan lifestyle. 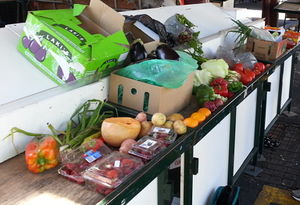 Results of a successful day on the QV market.

Dining hall Little Creatures at 222 Brunswick Street, Fitzroy is offering free bicycle rent. Information about the conditions of this offer is needed.