Lyon is the second biggest city of France. It offers a variety of freegan possibilities.

Bakery and supermarket dumpsters in Lyon are hard to find mostly because they are located in the courtyards of the buildings. And even if you find them, most likely they throw away the food early in the morning before the trash trucks come to empty the dumpsters. You can check your luck during the day by going into courtyards. You can do this by pressing the odd button on the interfone of the building, the button without any person's name next to it. If a building has this, it will open the door between 4am and 10am or something similar. Some supermarkets have the dumpsters outside but not many.

The trick to good dumpster diving in Lyon is to go early in the morning, between the time when the dumpsters are put outside on the sidewalk and the time the trash trucks come. This can vary greatly depending on the street and neighbourhood. So far there is no way of knowing these times except from experience. Trash days differ from district to district, or from town to town. Mondays seem to be the best. Between 5am and 8am are the times to go. Many times the supermarket trash is mixed with normal trash so don't give up if you find a bag of household waste. (Update from Sept.2011: For the 3rd arrondisement, here is some interesting/useful information found on the official Lyon website: number of trucks: 10 trucks, 10 drivers, 20 loaders and 18 other workers. Timetable: 6am to 1pm, depending on the street in question.)

To check the trash days of your area within Grand Lyon, visit this page. Click on the name of the district/town and scroll down to the bottom, see it under "Calendrier de la collecte des déchets - Collecte des ordures ménagères". 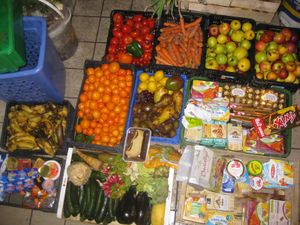 One evening catch from a Spar in Villeurbanne and a Lidl in Bron, Lyon.

Below are some good spots, times are approximate... can be earlier or later depending on a day. 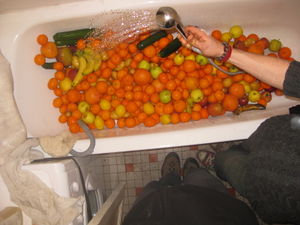 Washing dumpstered fruits in a squat in Villeurbanne.

One: go to the bottom floor with the escalator (where the metro is) and go through the white doors on your left. You arrive in an underground parking, where the trash is. The trolley with the food will arrive by the elevator. You just have to wait for them, and ask politely if you can take some food. If they have a bad day they'll say no, and throw it out. But no worries, usually it's in boxes, and you can get everything out without even soiling your hands. (usually this is where they go)

Two: just follow them to the trash nearby. Anyways, keep an eye on the bakery to see where they go.

Best option is keep an eye on the bakery and follow the cart because there are different places where they can throw away trash. Usually there are two or three other people waiting for these bags. On Sunday they are closed. (Last checked: Sept.2013)

There are many food markets in the city and if you go there around 11h-13h (depending on the closing time), you will find a lot of good stuff. Lyon is surounded by a vegetable producing area so there is really fresh food there.

Marche du quai Saint Antoine on the bank of the Saone river. Everyday except Monday. Monday is clothes day only. Rest of the time it's fruit & veg. It closes around 2pm. On Sunday you might encounter a lot of competition, but there is still plenty of stuff. The trash-truck is quick to come so don't be late.

Marche de la Croix-Rousse, to get there you will have to go on the hill of the Croix-Rousse, really nice view, lot of things to take.

Freeshop-collective Matosteque is a self-managed space to get things for free (based on lending and giving). The aim is to gather tools and such, usualy used for individual purposes but which could also be used for the community:

People at the freeshop want to get rid of the consumption logic, and of the "every man for himself". Their goal is to put in practice concrete solidarity and mutual aid in the Guillotiere neighborhood. Everything is for free for an equal access for everyone. Anyone can join the collective, as much/deep as he/she want/can.

Come every 2nd and 4th Sundays from 6pm to 8pm, take or bring gear/tools/other stuff and share a cup of coffee and access the internet, or just have a nice talk.

Other interesting places to check out