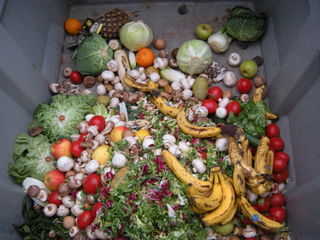 More than often you will find a lot of food in these low and large box-looking gray dumpsters.

Luxembourg has one of the highest GDP in Europe (and thus also in the world) which doesn't say that much about whether the country is rich or not yet there are loads of supermarkets from which a lot of food is thrown out.

Luxembourg has twelve cities, even though the only real city is Luxembourg City - the rest are rather towns with a city status. There are also smaller towns and villages in this small country. The cities of Luxembourg are: Luxembourg City, Diekirch, Differdange, Dudelange, Echternach, Esch-sur-Alzette, Ettelbruck, Grevenmacher, Remich, Rumelange, Vianden, and Wiltz.

As of yet there is no law to forbid dumpster diving in Luxembourg. As in this article the police if they arrive will only tell you to go away: "Police issued a verbal caution.". The sentence "The practice of dumpster diving is not permitted in Luxembourg" is most likely an addition of the author but it has no legal standing.

Some experiences of dumpster divers in Luxembourg: "Once a police van stoped right in front of the big compactor from where we just recovered six huge bags of food, one of them came round the van and asked us what we were doing and when we told him we were getting vegetables from the garbage he said it's good and that it's no problem, turned around and left."

In general it is best that one avoids mass media when it comes to dumpster diving as the large media groups are sponsored by large supermarkets and are not allowed by contract to make their sponsor look bad. Such is the case with the following report done by RTL in 2011 in which a few supermarkets are presented as wasting food but only after a report on Cactus (which sponsors RTL) as a bio fuel pioneer was included just before that part: http://tele.rtl.lu/waatleeft/replay/v/20120104/0/53663/

People have been caught by the police while dumpster diving but were always let go directly without being arrested. This is proved by some divers as well as this article although the phrasing of the article is confusing.

In April 2013 a teenager was crushed and killed in a dumpster in the morning when the garbage truck came to pick up the trash. Although the reason for why he was in the container is unknown, the time at which he was there might indicate he was not dumpster diving. See this article.

Free Your Stuff Luxembourg (FYSL) is a large group on Facebook where one can GIVE AWAY stuff (including non comercial information i.e. no ads, job offers/ excluding animals) and can find what one might NEED: http://www.facebook.com/groups/freethestuff The group has a document (not up to date) with a list of the places in Luxembourg where people might deposit stuff as in a freeshop: http://www.facebook.com/groups/freethestuff/doc/187195414651639/

Free Your Food Luxembourg works on the same principle as FYSL but restricted to food: http://www.facebook.com/groups/FreeYourFood

Luxembourg City is the capital of the country.

Differdange is an industrial town with a status of a city, in south-western Luxembourg.

Bettembourg is a small town and a part of the canton of Esch-sur-Alzette.

Dudelange is a small town with a status of a city in the south of Luxembourg on the border with France. You can dumpster dive at following places:

Esch-sur-Alzette is a town with a city status and a population of 27,146. It is Luxembourg's second-most populous town.

Junglinster is rather a village but you can dumpster dive at the Langwiss industrial zone:

Wasserbillig is a small village on the border with Germany. You can dumpster dive at following places: