From Trashwiki.org
(Redirected from Lock)
Jump to: navigation, search

Locked dumpsters can be extremely annoying for those who dumpster dive. You just know there's some decent food in there (or some cool electronics!) but you can't get to it. Methods described below are different ways of unlocking dumpsters, used by divers around the world. It is recommended though to leave locked dumpsters in peace, and look for the unlocked skips in the area. However, sometimes all dumpsters in the area can be locked, and that is why some dumpster divers chose to "create" dumpster diving places by finding ways to unlock dumpsters. It is known that sometimes constant dumpster lock "modifications" or its destruction can lead to the store owner giving up and letting the trash be stored unlocked (victory for dumpster divers), sometimes security instead gets more tight and those caught in action are persecuted by law (victory for store owners). These wars are known to exist mostly when there is either a very unfriendly store owner or very messy and respectless divers. Usually, though, in Western countries, you can find at least some dumpsters unlocked, and only in case of total despair it is recommended to use methods for unlocking locked dumpsters, and even then, it is good to stay smart and chose such ways which would cause least property damage for the owner, and therefore he would be less concerned for persecuting divers.

You must remember that all of these methods (or most of them, depending on your country) involve some sort of law violations, and while we on Trashwiki agree that it is wrong to lock away still perfectly useful waste, Trashwiki can not officially encourage others to violate law, therefore note that:

Trashwiki does not recommend neither any property damage nor any other law violation. If you do so, do it on your own risk.

Information below is merely a virtual space for activists around the world to share their knowledge. Edit this page if you know more!

Usually, dumpsters are designed with a single rod hinge at the back. This is so that the lid will open when it gets dumped into the truck. The front of the lid is usually the place that's locked, either with another bar or a chain and a padlock. Padlocks are hard to deal with, but the hinge often isn't.

Usually, the hinge rod is a bar with a washer welded at one end, and another loose washer and a split pin at the other end. You can simply close the legs on the split pin with your pliers (it can sometimes even be done by hand, or with a coin), and then pull the pin out, and remove the washer, and simply pull the whole hinge-rod out, and lift the lid up by the back.

The best part about this method is that you can simply put the hinge back in, and replace the washer and split pin, and no-one will know that you even visited, and it'll be even easier next time you come. 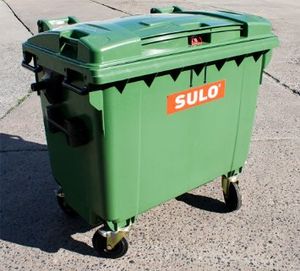 As in this video described, you can very easy remove the 2-4 hinge pins of a container and then open the lid from the back, so you don't have to deal with the padlock. After your job just put the pins back and nobody will understand, that the container has been opened. To get the pins out faster next time, take a knife and shorten the bulge a bit, so the pin will come out easier next time.

The technique described here will not yield immediate results. It takes time and dedication but is less risky and more effective than for example the brute force method.

Every locked dumpster has a lock. Locks work through pins that slide into the right place when the right key is put in, allowing the lockowner to turn the key and open the lock. By sticking a paperclip or toothpick inside and adding some superglue the lock will become jammed. Try to make the toothpick or paperclip so small that it dissapears into the keyhole, allowing no space for locksmiths to get it out with pliers. The superglue makes sure that the toothpick or piece of paperclip stays in place and also glues the pins of the lock in place, making it unable to open the lock even if the obstruction is removed. After inserting the glue, hold the lock upside down for a while to allow the glue to dry. This technique takes about two minutes and makes no noise. The nasty part is that the shopowner will arrive in the morning wanting to throw some trash out and find that he or she cannot open the dumpster. This forces them to call a locksmith or fiddle around themselves with tools to open it up. Doing this for a few days will quickly change their minds and either leave the dumpster unlocked (good for you), or other ways to keep the waste locked will be found (inside the shop for example, which is no good news for you then).

There is also a simpler method of jamming locks, for example inserting very small stones inside the lock. These might be easier to remove for the store owner later on, but it still creates a lot of inconvenience - if you continue doing that for some time, you have some 50% of chance that a dumpster will be left unlocked sooner or later.

Sometimes the bins are closed with a system integrated in them, needing a triangular key. The easiest way to open those is to get a triangle key or pliers to open the bin. But if you don't have those, or forgot them at home, you might open the bin by sliding your arm under the lid through the side (if possible). Then reach to the lock and move the metal plate that keeps the bin shut. You might have to press a bit on the lid where the lock is so that it's not too hard to move.

This method is the one you least want to have to do, because it risks damaging property (and therefore increasing fines), but if you can't do it any other way, just bust the chain with the bolt cutters or crow bar.

It seems theoretically possible to open a lock with a bump key. Please update if you have any tips.

See also: How to make a bump key.

Often the bins are in cages which are locked but to fix that you can lift the door up so it comes out of the hinges. There are different types of bin cages and one of the types can be lifted up because the hinges are not blocked at the top so the door can slide upwards easily. If you decide to glue a lock, try to glue it whilst the door is open. Not necessary but makes life easier for everyone.

Cages that have a handle on the inside: If they are really locked with a key that turns all the way then it's unlikely you can open it by these methods. But if the lock is one that just needs the handle to be pressed down, put your hand or some fingers through the bars and press the handle from the inside. Sometimes this handle is one that you can turn instead of pressing. If it's too hard to do that, and you have a pen knife with you or some metal object like a spoon handle, you can use that by putting it in between the door and the cage at the place where the lock is, and push the lock (to make the same effect that happens when the handle is pressed). Sometimes that is easier because the inside handle is out of reach.

If a supermarket is in a residential building you might be able to get to the dumpster by entering the courtyard of that building.

Courtyards: A courtyard might have several building doors that it can be accessed from. So if one is hard to open or in a main street where lots of people pass you might want to try the others. For example on a corner of a building, there are two entrances usually on the different intersecting streets. (IMPORTANT: Once inside the building, you usually have to get out of it to get to the courtyard. There will be another door, the one leading to the courtyard. Sometimes this door will open from inside the building but the handle on the other side will not open it. For this you should put something to keep the door from closing whilst you are dumpstering or you might get locked inside the courtyard. One time this happened and there was a particularly nasty old lady who told Smaua to get out the same way she came in. ALWAYS check that you can get back out easily :) These doors can be also carded sometimes but not always so it's easier to not let them close!)