Lancaster is a city in Pennsylvania, USA. With a population of 55,351, it is the eighth largest city in Pennsylvania, behind Philadelphia, Pittsburgh, Allentown, Erie, Reading, Bethlehem, and Scranton. The city has numerous small businesses including many coffeeshops, cafes, other small eateries, and many antique and art shops.

Lancaster is the most surveilled city of its size in the United States, with over 150 surveillance cameras across the city. It is unknown how this may specifically affect dumpster diving activities in main areas of the city.

The city of Lancaster has a pretty diverse population: students from the colleges, family dwellings, various ethnicities and economic backgrounds, so depending where you are in the city you can find different things with varying qualities, due of course to cultural and/or socio-economic differences. Neighborhoods of Lancaster provides a historic/present day look at the different neighborhoods. For example, the Chestnut Hill area is made up of students from Millersville University and F&M, small mix of Black, white, and Latino families, and a small amount of middle/upper class residents. The Stadium District and Ross areas have a higher density of the Asian populations in the city and the Southside and Cabbage Hill areas both have higher density of Blacks and Latinos.

There are a number of stores with dumpsters: 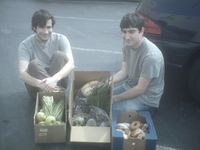 There is a Lancaster Food not Bombs (LFNB), which shares food weekly in the form of a picnic for everyone. Volunteers and folks from community meet on Monday at Lancaster Square (across the street from Binns Park) to grab soup, PB&J, salad, coffee, and/or any produce that is available. The volunteers collect food from a few vendors at Central Market, other farmers markets and bakeries in the area. All food is at the very least, vegetarian and the soup/stew is always vegan. Members of this group have decided that they will only take donations from businesses and people, and do not collect foodstuff from dumpsters nor do they accept dumpstered donations.

There is a Lancaster Really Really Free Market (LRFM) that is 'open' on the second Saturday of each month from 9am to noon. The group members consist many of the same folks in the Food not Bombs group. Lots of clothes, household wares, small furniture, and some other stuff up for grabs. They usually set up in Penn Square, just a block down Queen St from Binns Park/Lancaster Square.