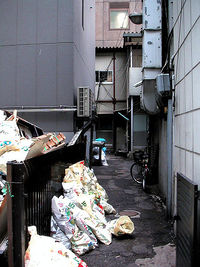 Japan is an affluent country in Asia and is good for finding trash. In Japan freegans can dumpster dive by the supermarkets, convenience stores, fruits & vegetables stores, 100 yen stores; markets and streets in general are quite good for finding both food and other stuff.

People in Japan generally sort their garbage to burnable/non-burnable material, glass and metal (cans, jar lids, etc.). Besides that, everything has to be put into transparent plastic bags for the garbageman to see if there is no "cheating" - freegans win from that, too, since one can easily identify what supermarkets throw away without opening a trash bag: if there are cans, bottles or just folded paper in trash bags, a smart to do would be abandoning them and moving instead to those bags that clearly have some fruits, vegetables and/or other goods.

Most supermarkets keep their garbage inside the building and never bring it out. That's a sad thing, since some expensive supermarkets throw away tons of good food. It is recommended to check in the first place for the supermarkets near you and see if they keep their garbage outside. If they don't, forget the place. If they do throw something out, check what kind of garbage is that. Some stores keep only bottles and cans outside and never bring fruits, vegetables or other expired food products out. If you're lucky you may find some good dumpster diving spots just a few minutes from your home, although generally there aren't many supermarkets with food dumpsters outside the store; most supermarkets have a policy not to throw fruits or vegetables away, even though it is still possible to find some expired food products.

Convenient stores are the best place to get some fresh food out of their garbage. All convenience stores (7-eleven, Lawson, FamilyMart) leave their garbage in a closet right by them. Sometimes you do have to open a small door, but don't be afraid. If you are there at the right time (the best probability is on early morning since they throw food away during the night shift), you'll find the garbage full of food. Everyday a whole bag of bentos (around 10 everyday), onigiris (around 20 everyday), baked products and fresh snacks are dumped. You'll be able to eat and store these products for up to a week. If you are out of luck, just walk 5 more minutes to the next convenience store and try again.

You can try checking fruits and vegetables stores in your neighbourhood. Some of them leave no trash, but some do. You never know what you can get.

There aren't many of them in Japan but those that do exist can be very good for dumpster diving. For example, the biggest market in Tokyo - Tsukiji - is quite a good place for freegans. There is a huge produce section and you can nearly always return from there with a backpack full of different kind of fruits and vegetables. Best time to go is from 9am to 1pm, but afternoon is OK, too. Because it's a wholesale market, people throw away many things without much thinking. Look for piles of boxes or trash bags, and check them. Some boxes look empty but they may have many good things inside.

100yen stores is one of the primary targets for freegans. One can find two types of them in Japan: the one that sells mixed kind of stuff, and the other one that sells mainly food. The latter one works non-stop, 24/7, and usually throws away more garbage than he first one. First thing you should do is to check where they place their garbage. Some of them lock it inside, some have dumpsters at the front of the store, and some place them somewhere nearby (behind the corner in the small street, etc.). Of course, you can't do anything if they lock their garbage in the store. If dumpsters are placed at the front of the store, checking what's inside them becomes quite complicated and probably not so convenient, especially when the streets are busy - you don't want to atract anyone's attention. But it's not so difficult to find 100yen stores that put their garbage in small streets around the corner - in such cases dumpster diving becomes really easy.

What you can get from 100yen store? It depends, but usually they throw away quite much of their produce. One can get different kinds of fruits and vegetables: apples, oranges, tangerines, pineapples, lemons, kabocha, daikon, salads, cabbages, carrots, potatoes, sweet potatoes... Expired goods appear to be thrown away more seldom, although it is possible to find spices, flour, pasta, soy milk, tofu, some ready-to-eat meals, etc.

Japanese people get rid of things by leaving them on the streets for garbageman to pick them up. There are special days for specific types of things to be thrown away. For example, on a "paper" day one can find many books (e.g. manga comics), magazines, newspapers, etc; on a "burnable trash" day one can find clothes; and so on. You can also find bulky items (furniture, electric equipment, etc.) on random days left outside the houses. Some of them can be surprisingly in a very good condition. In this way, of course, you can find only non-edible things.