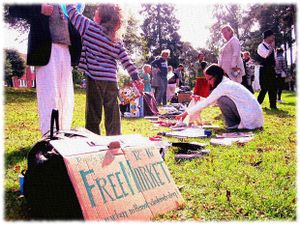 Järna, Sweden, is a town of around 9000 inhabitants. It is situated 17 km to the south of Södertälje and 50 km from Stockholm (see map).

Although Järna has a lack of dumpster diving possibilities, its closeness to Stockholm compensates this. Besides, it is just a short train ride to Gnesta which has to offer some occasionaly successful dives.

There are also rumors that the ecological biodynamic bakery Saltå Kvarn in Järna (map) sometimes has its containers filled with unsold bread, flour and such. (Info as of: 2011)

In summer and autumn it is worth checking the container of Nibble Trädgård (map), you might find biodynamical vegetables in there. (Last checked: June 2012)

In late summer and early autumn, you can collect berries (lingonberries and blueberries) and mushrooms in the forests around town, and preserve them for the winter. Fields often are rich in camomile which makes a good relaxing tea.

There are quite a few apple and pear (sometimes even plum) trees both in town and around it. You can definitely collect some fruits, especially when you see that a tree most likely has no owner (no house around, or situated randomly in town by the railway tracks or so). Fruit trees can also be found on local farmsteads around the town - locals do not always hurry to pick their own apples (very often choosing to consume imported ones instead), so you can always try to ask a farmer for a permission to get some fruits if you see that his apple trees look abandoned. When to collect: August and September (apples and pears stay nice even in October).

Local activists occasionally organize Really Really Free Market (RRFM) in central Järna. Get in touch with local activist Romuald if you want to get help with organizing RRFM in Järna. Join RRFM Järna on Facebook.

Very similar to RRFM Järna, there is a so called Järna Tillsammans group which is somewhat based on Freecycle movement ideology where different items can be shared and given for free. People are also encouraged to share or provide services and skills for free, or in exchange for another services. Join Järna Tillsammans on Facebook.

There is a so called byteskällare ("swap basement") at Norrtuna. It is some kind of a freeshop where one can drop by to leave or take various stuff. It is said that only Norrtuna inhabitants can use it.

A so called Fröbytardag is taking place in Järna annually: people gather at one place and share various plant seeds for later cultivation. One does not need to have own seeds (can get them for free, for a donation or at low cost). Join Fröbytardag on Facebook.

Other things for free

Note that local library has a free WiFi Internet.