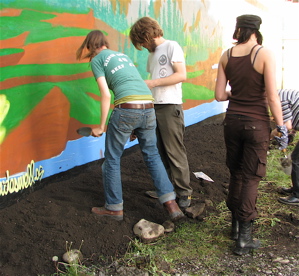 Guerrilla gardening is also called political gardening, a form of nonviolent direct action, primarily practiced by environmentalists. It is related to land rights, land reform, and permaculture. Activists take over ("squat") an abandoned piece of land which they do not own to grow crops or plants. Guerrilla gardeners believe in re-considering land ownership in order to reclaim land from perceived neglect or misuse and assign a new purpose to it.

Some guerrilla gardeners carry out their actions at night, in relative secrecy, to sow and tend a new vegetable patch or flower garden. Others work more openly, seeking to engage with members of the local community, as illustrated in the examples that follow. It has grown into a form of proactive activism or pro-activism.

The earliest record of the term guerrilla gardening being used was by Liz Christy and her Green Guerrilla group in 1973 in the Bowery Houston area of New York. They transformed a derelict private lot into a garden. (Lamborn, P., and Weinberg, B. (Eds.), (1999), Avant Gardening: Ecological Struggle in The City and The World. Autonomedia.) The space is still cared for by volunteers but now enjoys the protection of the city's parks department.

Guerrilla gardening of this form - that is gardening on someone else's land without permission - has been around for centuries, there is even a reference to it in the Bible. Two celebrated guerrilla gardeners, active prior to the coining of the term, were Gerrard Winstanley, of the Diggers in Surrey, England (1649), and John "Appleseed" Chapman in Ohio USA (1801). Some would consider the latter, John Chapman, to not be a guerrilla gardener as he was planting orchards on untitled land.

Guerrilla gardening is happening all over the world. In Northern Utah, apple trees commonly grow along the banks of canals. Asparagus grows along the smaller ditch banks. Many of these plants were seeded 150 years ago by the workers who dug the canals, by burying their lunch apple core in the freshly dug soil, or by surreptitiously spreading seeds along a new ditch-bank. Guerrilla gardening continues today as individuals secretly plant fruit trees, edible perennials, and flowers in parks, along bike trails, etc. Some guerrilla gardeners do so for the purpose of providing food. For example the Tacamiche banana plantation workers in Honduras illegally grew vegetables on the abandoned plantation land rather than leave with the plant's closure in 1995.

The term "guerrilla gardening" is applied by some quite loosely to describe different forms of radical gardening. This includes gardening as an entirely political gesture rather than one with genuine horticultural ambition such as the London May Day protest in 2000 when no long term garden was expected to take root. Guerrilla gardening has also been used by a number of writers to give a radical edge to their gardening books. One of these is a book titled "Guerrilla Gardening" was published in 1983 by John F. Adams aimed at encouraging amateur gardeners to grow heirloom varieties that are not the result of corporate hybridization. Another was a book by Barbara Pallenberg called "Guerrilla Gardening" which instructed how to make a garden on a small budget.

The term bewildering has been used as a synonym for guerrilla gardening by Australian gardener Bob Crombie.On the verge of a revolution, Sydney Morning Herald, 20 February 2008

One high-profile example of guerrilla gardening took place in May 1996, when about 500 activists affiliated with The Land is Ours, including the journalist George Monbiot, occupied 13 acres of derelict land belonging to the Guinness company on the banks of the River Thames in Wandsworth, south London. Their action aimed to highlight what they described as "the appalling misuse of urban land, the lack of provision of affordable housing and the deterioration of the urban environment".

A community grew up on the site called "Pure Genius!!" (named after the Guinness advertising slogan). They lived there for five and a half months before being evicted.<ref>'Pure Genius' land squat, Wandsworth, London, 1996</ref>

On July 1, 1996, "Have på en nat", which means "a garden in a night", was made by the Danish organic starters. It was part of the Copenhagen's "City of Culture" festival. A group of young people from Økologiskeigangsættere, a local Agenda 21 organisation, worked for two years preparing to build a garden on a derelict inner city site - not quite in one night - but over a few days. The young people decided that they wanted a community garden on the 300 m2 site. They learned practical skills such as carpentry, plumbing, bricklaying and horticulture and prepared and grew everything off site, so that when the time came the garden could be assembled almost "overnight". There was something for everyone: little paths wound around the site by a turfed area, trees, shrubs, flowers and vegetables. About 1000 people took part in the project. The garden remained until the site was reclaimed by the council to be developed for housing in April 2001.

On May Day 2000, Reclaim the Streets organised a mass guerrilla gardening action in Parliament Square, London. After a carnivalesque procession with a samba band, and a Critical Mass bike ride from Hyde Park, thousands of guerrilla gardeners occupied the square and planted vegetables and flowers. A maypole was erected around which many of the gardeners danced. Banners hung in the square reading 'Resistance is Fertile' (a pun on "futile"), 'Let London Sprout', 'Capitalism is Pants', and 'The Earth is a Common Treasury for All,' the latter being a quote from the seventeenth century Digger Gerrard Winstanley. An Indymedia public access terminal was set up in the new allotment, and the statue of Winston Churchill was given a green turf mohican. The perpetrator (an ex British soldier) was fined for his vandalism of the Churchill statue.<ref>London Mayday 2000 pages on Urban 75</ref>

Leaf Street is an acre of land in Hulme, Manchester, England that was once an urban street until turfed over by Manchester City Council. Local people, facilitated by Manchester Permaculture Group, took direct action in turning the site into a thriving community garden.[1]

The South Africa shack dwellers' movement Abahlali baseMjondolo has begun gardens in a number of their affiliated settlements such as the Kennedy Road settlement.

Landless Workers' Movement (MST), in Brazil, has occupied millions of hectares of land in Brazil and put them under cultivation.

GuerrillaGardening.org<ref>GuerrillaGardening.org</ref> was created in October 2004 by Richard Reynolds as a blog of his solo guerrilla gardening outside Perronet House, a neglected council block in London's Elephant and Castle district. At the time his motivations were simply those of a frustrated gardener looking to beautify the neighborhood, but his website attracted the interest of fellow guerrilla gardeners in London and beyond as well as the world's media. Richard's guerrilla gardening has now reached many pockets of south London and news of his activity has inspired people around the world to get involved. He also works alongside other 'troops', some local and some who travel to participate. He has also guerrilla gardened in Libya, Berlin and Montreal. Today GuerrillaGardening.org is still his blog but also includes tips, links and thriving Community<ref> http://guerrillagardening.org/community/index.php Community</ref> boards where guerrilla gardeners from around the world are finding supportive locals. His book, "On Guerrilla Gardening"<ref>On Guerrilla Gardening</ref>, describes and discusses activity in 30 different countries, was published by Bloomsbury Publishing in the UK and USA in May 2008.

Early on Saturday, April 26, a team of volunteers installed forty-nine small birdhouses along the entire length of Hanover Avenue in The Fan District of Richmond, Virginia. They were built from untreated lumber and were specifically sized to provide a safe haven for some of Richmond’s local song birds including wrens, blue birds, and finches from the unwelcome non-native species such as the Starling and the European Barn Swallow.

The installation was inspired by a combination of several local developments.

Additionally, the Guerrilla Gardening movement has been catching on in Richmond, Virginia. In 2006, Style Weekly reported an act of Guerrilla Gardening in an alley off Hanover Avenue adjacent to the new birdhouses.<ref>Style Weekly Article: http://www.styleweekly.com/article.asp?idarticle=13219</ref> Also, a group called Tricycle Gardens has begun the reclamation of blighted urban spaces in some of Richmond's poorest neighborhoods.<ref>Tricycle Gardens: http://www.tricyclegardens.org/blog/index.html</ref> Their efforts are bringing locally grown food and a better understanding of the interconnectedness humans have with nature to the city.

The volunteers who installed the birdhouses have asked members of the community to tend the houses in the fall once the breeding season is complete. The houses have been designed with a hinged right panel for easy cleaning.

A covert group in Los Angeles headed up by an agent know only as Mr. Stamen has a garden in Hollywood at Wilton and Sunset. The garden consists of many drought resistant plants and has been supported by community members. Photos of their garden are here http://www.laguerrillagardening.org

This group also has done some unique work with Manual Arts High School in South Central, Los Angeles. The Los Angeles Troop was invited to be a part of a special project hosted by UC Berkely teaching students about pollution and sustainable living. Members of the troop hosted a seed bomb workshop with the students and are working on building a garden close to school.