From Trashwiki.org
(Redirected from Greater London)
Jump to: navigation, search 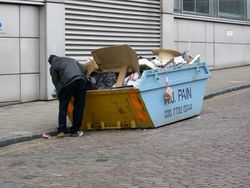 A man rummaging through a skip at the back of an office building in Central London.

London, the capital of England, UK, is a wonderful city for its free food.

There are also two counties, City of London and Greater London, which both constitute what we simply know as London. This page unites all administrative units related to London.

www.dumpstermap.com has several things added for London. It seems to be a good way to see what is in your area since it's such a huge city. Maybe someone could add things to the map and add things from the map to the list as well?

At all street markets, as with anywhere else, it is easy to gather free food when they're clearing up. However, the main market in London for dumpster diving is the New Covent Garden market, in Nine Elms, near Vauxhall. You can go any time between 10pm and 10am. In the last year, however, security guards in vans have made it much harder. They chase anyone collecting food and ask them to leave. They hand you a leaflet warning that it is a criminal offence to take the food. This has been enough to scare many people from collecting at the market. But some people may still manage it, if they are fast, or go at a time when the guards aren't present.

The Food Not Bombs collective in Whitechapel often hold freeshops too, to give away free clothes, etc. to the community.

Supermarkets are often difficult to dumpster dive at. Sometimes you can get very lucky with Boots, Marks & Spencer, Waitrose, Sainsburies and Tescos. But most of the time their rubbish is inaccessible, hidden away in a loading bay you can never access. Only a few of their stores place the rubbish in dumpsters on the street; but when you find a good one, it can feed you and your friends for months.

Paul's is a fantastic bakery, found in various places over London (check their website for exact addresses), which throws out the most luxurious of breads, baguettes and cakes in bin bags outside the shop after closing time.

Starbucks, Pret a Manger, Costa and especially Eat are always reliable for their wasting of good food, but make sure that you beat the binmen to the food! The best time for Eat is around 7pm (sometimes earlier, depending on when it closes), and around 9pm-10pm for Starbucks. The best areas in central London for coffee shop finds are Mayfair, Holborn, and Goodge Street.

The sandwich chain Eat throw out all of their remaining food at the end of the day, and except for a few of them who give to charity, it's always a very reliable source of yummy salads/sandwiches/cookies. Lately some of their branches have started destroying their food before they throw it in the bags, meaning the baguettes are partly out of their wrappers, the salads are opened up. Try the branches of Eat at Fenchurch Street, Liverpool Street, and Great Eastern Street.

Sub-regions used here are ones adopted by the EU and used by 'London's Poverty Profile' (.org.uk)

Unfortunately, Kingston is so overrun with chain shops that they all seem to be connected with some underground waste disposal scheme hidden in the depths of the carparks, however, on a good day there are still a few places there. There are two markets still run amongst the commercial madness:

Address: 780 Bath Rd, Hounslow, Greater London TW5 9SL Location of the bins: Round the back in the car park, always the ones closest to the back door but never had any problem with the staff here! (Last checked: July 2012)