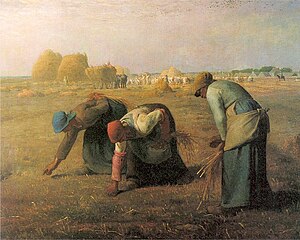 Gleaning is the act of collecting leftover crops from farmers' fields after they have been commercially harvested or on fields where it is not economically profitable to harvest. Some ancient cultures promoted gleaning as an early form of a welfare system. For example, ancient Jewish communities required that farmers not reap all the way to the edges of a field so as to leave some for the poor and for strangers.

In the modern world, gleaning is practiced by humanitarian groups<ref>Food Banks Finding Aid in Bounty of Backyard NYT - Sept 9th, 2008 http://www.nytimes.com/2008/09/14/us/14harvest.html?ei=5070&emc=eta1</ref> which distribute the gleaned food to the poor and hungry; in a modern context, this can include the collection of food from supermarkets at the end of the day that would otherwise be thrown away. There are a number of organizations that practice gleaning to resolve issues of societal hunger; the Society of St. Andrew, for example, is dedicated to the role.

When people glean and distribute food, they may be bringing themselves legal risk; in the Soviet Union, the Law of Spikelets criminalised gleaning, under penalty of death, or 10 years of forced labour in exceptional circumstances. In the USA, The Bill Emerson Good Samaritan Food Donation Act, a law enacted in 1996, limited the liability of donors to instances of gross negligence or intentional misconduct, alleviating gleaning from much of its legal burden; American Food Salvage programs work within the legal definitions of the Good Samaritan Act, to consistently deliver surplus food from restaurants and dining facilities to emergency food centers.

Gleaning has been studied artistically as well as legally. Gleaning in rural France has been represented in the painting Les Glaneuses (1857) by Jean-François Millet, and explored in a 2000 documentary film, The Gleaners and I, by Agnes Varda.