From Trashwiki.org
(Redirected from Garbage)
Jump to: navigation, search 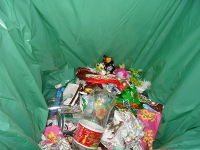 Common rubbish in a bin bag. 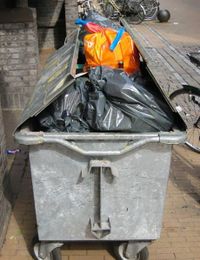 Waste is an unwanted or undesired material or substance. It is also referred to as rubbish, trash, garbage, or junk depending upon the type of material and the regional terminology. In living organisms, waste relates to unwanted substances or toxins that are expelled from them.

Waste management is the human control of the collection, treatment and disposal of different wastes. This is in order to reduce the negative impacts waste has on environment and society.

Waste is directly linked to the human development, both technologically and socially. The composition of different wastes have varied over time and location, with industrial development and innovation being directly linked to waste materials. Examples of this include plastics and nuclear technology. Some components of waste have economical value and can be recycled once correctly recovered.

Biodegradable waste such as food waste or sewage, is broken down naturally by microorganisms either aerobically or anaerobically. If the disposal of biodegradable waste is not controlled it can cause a number of wider problems including contributing to the release of greenhouse gases and can impact upon human health via encouragement of pathogens.

It is difficult to define specifically what a waste is. Items that some people discard have value to others. It is widely recognised that waste materials are a valuable resource, whilst there is debate as to how this value is best realised. Governments need to define what waste is in order that it can be safely and legally managed. Different definitions need to be combined in order to ensure the safe and legal disposal of the waste.<ref>Torbay Council (2006) Municipal Waste Management Strategy for Torbay, Consultation Draft</ref>

As a nation, Americans generate more waste than any other nation in the world with 4.5 pounds of municipal solid waste (MSW) per person per day, 55 percent of which is contributed as residential garbage. The remaining 45 percent of waste in the U.S.'s ‘waste stream' comes from manufacturing, retailing, and commercial trade in the U.S. economy <ref>March 2008, Cashing in on Climate Change, IBISWorld</ref>. 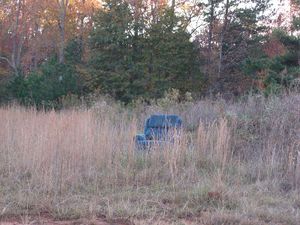 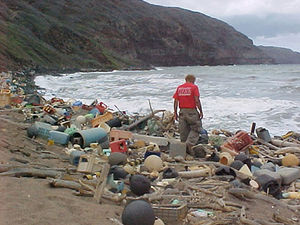 Marine debris on the Hawaiian coast.

Many different types of waste have negative impacts upon the wider environment.

Waste pollution is considered a serious threat by many and can broadly be defined as any pollution associated with waste and waste management practices<ref>Green Ontario: Solid Waste</ref>. Typical materials that are found in household waste which have specific environmental impacts with them include biodegradable wastes, batteries, aerosols, oils, acids and fluorescent tubes.

Biodegradable waste is of specific concern as breaks down in landfills to form methane, a potent greenhouse gas. If this gas is not prevented from entering the atmosphere, by implication, it contributes to climate change.<ref>The Landfill Directive Defra </ref>

Littering can be considered the most visible form of solid waste pollution<ref>Attitudes and Actions: A National Survey on the Environment</ref>. The act of littering for the most part constitutes disposing of waste inappropriately, typically in public places. Littering itself may or may not be an intentional action.

Marine debris, also known as marine litter, is human-created waste that has deliberately or accidentally become afloat in a lake, sea, ocean or waterway. Though it was originally assumed that most oceanic marine waste stemmed directly from ocean dumping, it is now thought that around four fifths<ref></ref> of the oceanic debris is from rubbish blown seaward from landfills, and washed seaward by storm drains.<ref></ref>

Other forms of pollution associated with waste materials include illegal dumping and leaching<ref>Solid Waste</ref>. Illegal dumping of flytipping often involves unregulated disposal of materials on private or public land. Remoted sites with road access coupled with limited surveillance often provides the perfect opportunity for this form of dumping which often goes unpunished and leaves others (such as the community or developer) to properly dispose of the waste. Leaching is the process by which contaminants from solid waste enter soil and often ground water systems contaminating them.

Most waste ends up here, in a landfill, where it is left to break down.

Most waste is comprised of the following materials.

(* Denotes waste that can be recycled.)

Although most of this waste is recyclable, very few of it makes it to a recycling facility. Plastics, Metals and Glass can sit in landfills for millions of years before they break down. And when incinerated, they release toxic fumes. In developed area, there are services that will remove these materials, and properly recycle them. But for most people, no service exists. Recycling takes much energy, a lot of labor, and does not leave much of a final product. For most of the world it is a lot easier to just throw it in the garbage than take the hassle of recycling it.

The European Union defines waste as an object the holder discards, intends to discard or is required to discard is waste under the Waste Framework Directive (European Directive 75/442/EC as amended). 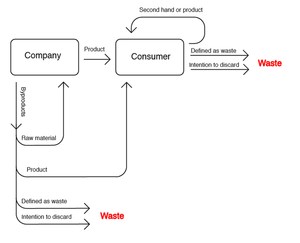 Schematic illustration of the EU Legal definition of waste.

Once a substance or object has become waste, it will remain waste until it has been fully recovered and no longer poses a potential threat to the environment or to human health."<ref>The Definition of Waste Waste Definition, Agrarian </ref>

The UK's Environmental Protection Act 1990 indicated waste includes any substance which constitutes a scrap material, an effluent or other unwanted surplus arising from the application of any process or any substance or article which requires to be disposed of which has been broken, worn out, contaminated or otherwise spoiled; this is supplemented with anything which is discarded otherwise dealt with as if it were waste shall be presumed to be waste unless the contrary is proved. This definition was amended by the Waste Management Licensing Regulations 1994 defining waste as:[havok] for ever.

"any substance or object which the producer or the person in possession of it, discards or intends or is required to discard but with exception of anything excluded from the scope of the Waste Directive".<ref>Waste explained CIWM</ref>

Education and awareness in the area of waste and waste management is increasingly important from a global perspective of resource management. The Talloires Declaration is a declaration for sustainability concerned about the unprecedented scale and speed of environmental pollution and degradation, and the depletion of natural resources. Local, regional, and global air pollution; accumulation and distribution of toxic wastes; destruction and depletion of forests, soil, and water; depletion of the ozone layer and emission of "green house" gases threaten the survival of humans and thousands of other living species, the integrity of the earth and its biodiversity, the security of nations, and the heritage of future generations. Several universities have implemented the Talloires Declaration by establishing environmental management and waste management programs, e.g. the waste management university project. University and vocational education are promoted by various organizations, e.g. WAMITAB and Chartered Institution of Wastes Management.