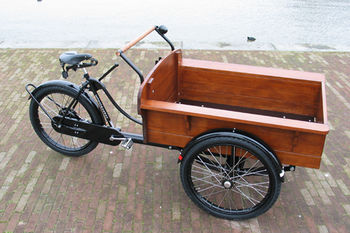 A bakfiets is a tricycle with a large area in the front of it for transporting cargo. It is also called a freight bicycle.

Freight bicycles, carrier cycles, freight tricycles or cargo bikes are human powered vehicles designed and constructed specifically for transporting large loads. Vehicle designs usually include a cargo handling area consisting of a steel tube carrier, an open or enclosed box (cabinet), a flat platform, or a wire bracket basket. These are usually mounted over one or both wheels, low behind the front wheel, or between parallel wheels at either the front or rear of the vehicle. The frame and drivetrain must be constructed to handle loads several times that of an ordinary bicycle. Other specific design considerations include operator visibility and load suspension.

Because of the strong economic advantageous realizable by widespread proliferation of freight bicycles, Oxfam has designed the OxTrike and established local production at community workshops in non-industrialized countries for use in non-industrialized countries worldwide. Dangdang, China’s biggest online bookseller, uses 30 bicycle courier companies in 12 cities to deliver goods and collect payments.