From Trashwiki.org
(Redirected from Food not bombs)
Jump to: navigation, search

Food Not Bombs is a loose-knit group of independent collectives, serving free vegan and vegetarian food to others. Food Not Bombs' ideology is that myriad corporate and government priorities are skewed to allow hunger to persist in the midst of abundance. To demonstrate this (and to reduce costs), a large amount of the food served by the group is surplus food from grocery stores, bakeries and markets that would otherwise go to waste. This group exhibits a form of franchise activism. 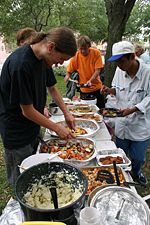 Food Not Bombs is an all-volunteer global movement that shares free vegetarian meals as a protest to war and poverty. Each chapter collects surplus food that would otherwise go to waste from grocery stores, bakeries and markets, sometimes incorporating dumpster diving, then prepares community meals which are served for free to anyone who is hungry. The central beliefs of the group are:

Food Not Bombs works to call attention to poverty and homelessness in society by sharing food in public places and facilitating gatherings of poor and homeless people.

Food Not Bombs began in the early 1980s in Cambridge, Massachusetts, USA, a city adjacent to Boston, when a group of anti-nuclear activists, who were protesting the nearby Seabrook power plant, began spray-painting the slogan “Money for food, not for bombs” around the city. The slogan was shortened to “Food Not Bombs”, and it became the name of their group. Soon after, they decided to put their slogan into practice. At a meeting of wealthy bank executives who were financing nuclear power projects, the group showed up and started handing out free food outside to a crowd of three hundred homeless people. The action was so successful that the group began doing it on a regular basis, collecting surplus food from grocery stores and preparing it into meals.<ref></ref><ref></ref><ref></ref>

In 1988, a second chapter of Food Not Bombs was formed in San Francisco. Nine volunteers were arrested on August 15, 1988. Mayor Art Agnos initiated the first confrontation by using riot police to shut down a Food Not Bombs serving at Golden Gate Park. By the end of the month city police had made 94 arrests. New groups started in Washington D.C., Vancouver, B.C., Long Beach, California and more than 10 other cities. The next summer police tried to drive the homeless from the city. Homeless people started a tent city across from City Hall and invited Food Not Bombs to provide food. Food Not Bombs moved onto Civic Center Plaza and started providing free vegetarian food 24/7 for the next twenty seven days until Agnos sent in the riot police driving everyone off the plaza. Conservative Mayor Frank Jordan succeeded Agnos and tension continued between Food Not Bombs and the Office of the Mayor. Jordan made over 700 felony arrests for sharing free food. With each wave of arrests the local group expanded. With crowds of hundreds of people at each serving, police action was difficult. Members of Food Not Bombs began videotaping police actions in 1989 and using the court system to try to stop police abuse.

During the 1990s a number of Food Not Bombs groups faced opposition from local law enforcement, which dissipated after politicians began to publicly support the group. When volunteers with Boston Food Not Bombs were arrested, city council members came out and served food with the group to show their support. They were never arrested again. In the San Francisco election of 1995, mayoral candidate Willie Brown promised to stop the attacks on Food Not Bombs. Brown won the election and the police made only a few more arrests. Food Not Bombs co-founder Keith McHenry was arrested on June 27, 1997 for trying to bring food to a protest at the National Conference of Mayors. In part because of the media attention in San Francisco, chapters began springing up all over the world.

Chapters of Food Not Bombs were involved in the rise of the Anti-Globalization Movement in the late 1990s, leading to the APEC resistance in Vancouver in 1997; the June 18, 1999 International Carnival Against Capitalism; and the “Battle of Seattle” later that year, which shut down the World Trade Organization meetings. Food Not Bombs helped start the Low Watt FM Free Radio, the October 22nd No Police Brutality Day, and Homes Not Jails during the San Francisco days. 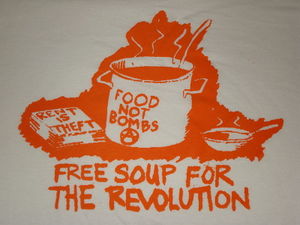 "Free Soup for the Revolution" illustration

Food Not Bombs supported the actions against the Iraq War by providing meals at protests all over the world. Food Not Bombs groups have also been heavily involved in the Protests against the 2003 Iraq war which arose in 2002–2003 to oppose the 2003 invasion of Iraq. During a presentation to the University of Texas at Austin in 2006, an Federal Bureau of Investigation (FBI) counter-terrorism official labeled Food Not Bombs and Indymedia as having possible terrorist connections.<ref>Food Not Bombs, Indymedia investigated by FBI</ref><ref>FBI names Austin Indymedia, Food Not Bombs and Anarchists to Domestic Terrorist Watch List</ref>

In the fall of 2007 Eric Montanez of Orlando, Florida's Food Not Bombs was charged with violating a city ordinance by feeding more people in a public park at one time than the law allows without a permit. On October 10, 2007 Montanez was acquitted by a jury.<ref></ref><ref></ref>

In May 2008, local business owners attempted to stop the Kitchener, Ontario Food Not Bombs from serving in a highly visible downtown location,<ref></ref> describing the group as supporting meat-free diets, anti-capitalism, and an end to Canada's military intervention in Afghanistan, as well as having links to al-Qaeda,<ref></ref> although this last claim has not been substantiated. 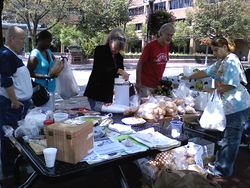 Folks in Lancaster, PA grab some food and drinks at the public park.