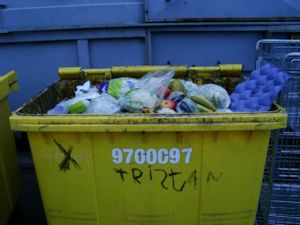 Egilsstadir [Icelandic spelling: Egilsstaðir] is the biggest town in the eastern part of Iceland.

Egilsstaðir is not actually a town in European standards, way too small to be called like that. But (not suprisingly) it´s quite big by Icelandic standarts, thus called a 'town'. Egilsstaðir is located 25km from touristy Seyðisfjörður and something like 30km from Hallomsstaður where you can visit the biggest forest in Iceland. Don´t be suprised though, in some countries it would be hardly considered a park!

It's easy to be a freegan there and there's much food to rescue. (Depending on your approach, you do that either of environmental concern or simply saving your money.)

Check "Bónus" skips to skip some veggies and other produce. There are three (!) yellow trash containers just for food. Second good part is that most of it (something like 80%) is vegan or at least vegetarian. Regular finds include apples, peppers, broccoli, grapes, juice, bread, pizza dough in plastic boxes and even occasional package of soya milk.

There's a huge blue bin around the back of N1 gas station and the Söluskáli restaurant. Most of the bin's content tends to be just a regular trash though. In front of this gas station there's a shopping centre "Samkaup úrval". Check their bins, too. It's just a walking distance (2-3mins) from Bónus. Now they have a huge green container where all the trash goes to. Black trash bags usually contain fruits and veg in almost perfect condition.

Don't bother yourself with "Subway"s bins: even if they throw away a lot of cookies in the end of the day (personal contacts confirm this), employees put them in the bag together with the regular trash.

All shops close very early, even during the summer. Everything (except cafes and restaurants) will be shut before 8pm.

It´s best to go skipping late in the evening as chances of being confronted by the police or suprised passers-by are quite small then. Besides, polar days are not just a myth, they are literally VERY light even at two o´clock in the morning, although durings winters you won´t get more than 3-4 hours of daylight... Anyway, choose the time that is most convenient for you and... good luck!