Dresden is the capital of Saxony which is the part of Germany that borders to Poland and Czech Republic. 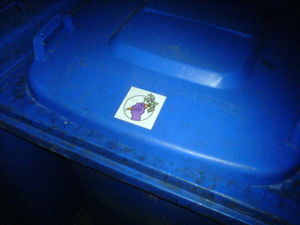 The bin behind Konsum.

There is a Konsum supermarket in a part of Dresden that is called Weißer Hirsch. You can easily get there by tram line 11, getting off at Plattleite. There are several bins behind the store; look for the one which has a Food Not Bombs sticker on it. You can get vegetables, dairy products, sometimes flowers and, if you're lucky, soy milk from that bin.

More centrally located you can find several supermarkets between the old town and Johannstadt and in Neustadt with open dumpsters usually containing lots of veggies/fruit. The Kaufland at the Kohlenstraße in the south of Dresden has well accessible dumpsters with a lot of vegetables and fruits.

See the map for details (feel free to edit it too!).

Konsum Alaunstraße - Good spot! several dumpsters for veggies and one for milk/cheese/meat stuff, Wednesday seems to be flower day! - access via Katharinenstraße

Bio Company Luisenstraße/Königsbrücker Straße - one dumpster in the backyard - they seem to recycle well, I seldomly found anything

Edeka @ Heeresbäckererei - several dumpsters, no competition (at least I never met anybody there)