From Trashwiki.org
(Redirected from Diver's etiquette)
Jump to: navigation, search 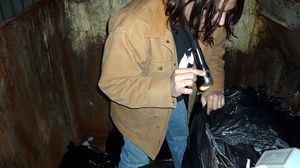 It is nearly always good to have a flashlight.

A dumpster diver is someone who takes items that have been discarded (trash), in order to make better use of them, principally by turning them into something usable or edible via dumpster diving.

Why it is cool to be a dumpster diver

Because dumpster diving is:

Sometimes, often or even always you will need:

Is there something you have to watch out for?

Most common places to look for useful trash... Where are those?

Basically, try to appreciate the fact that you get stuff or food for free, and don't make life harder for other dumpster divers, especially when you know you won't come to this spot again. You are not alone diving in this world!