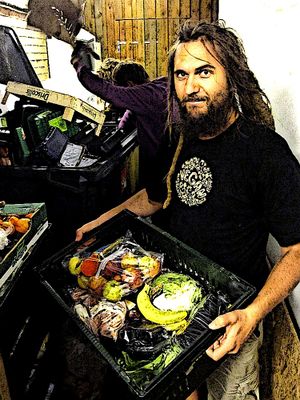 Denmark is a pretty interesting country to do dumpster diving. It has to offer many freegan opportunities.

It's not illegal to dumpster dive there as long as you don't do any trespassing; however, dumpster diving there is not legal either (as of December 2008, all is very much situational). If you do trespass and get caught in action, you can only be dismissed. If you jam up locks or do other kinds of vandalism, you could possibly be charged for it. The police can only charge you if you break anything.

Apparently, in Copenhagen police turn a blind eye to dumpster diving because they've got better things to do than harass dumpster divers. But in the provincial towns the story is quite different: if you are unskilled/unlucky enough to be caught in the act you'll get your name & identity number recorded; you can be warned and even fined (up to 500 Danish crowns, which is around 85$). If you are an ethnic Dane you stand a better chance of talking your way out of any unpleasantness, but if you are a foreigner you may find that cops are not terribly sympathetic.

There are quite a few Eastern & Southern European "seasonal workers" and such who do dumpster diving in Denmark.

Shop keepers tend to vary greatly in their acceptance of dumpster divers, some don't care at all, some bakeries even give away bread around closing time, and sometimes store clerks will give away perishables to friends and contemporaries. Others are less sympathetic, no-one puts rat poison in the dumpsters and in return most dumpster divers don't jam the locks on the gates and trashcans, very few trashcans generally are locked and those which are are broken.

Why was this item thrown out, it is still good for another x days/months/years... 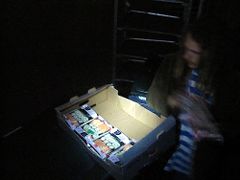 Dumpster diving for sushi in Copenhagen. 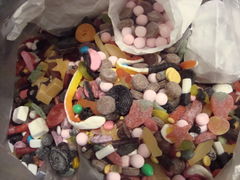 Lots of candy in Copenhagen.

Generally, if something gets dirty or (partly) damaged in some way or another, like a bottle of wine in a box breaks and spills red wine over the other bottles, all the the latter ones will either be drunk by the staff after work or tossed in the trash depending on how loyal/honest/stupid they are.

Don't abuse this fact however - surely, you can go into the store during the day and damage some produce or its package and then at night collect it from the trash the same night, but if you get caught, you might get charged with fraud which is a very serious offence in Denmark! Besides, you don't have to do that as there are enough clumsy people and enough stuff thrown away. You shouldn't get picky, it's more fun and more challenging to make something of whatever you find than obviously breaking the law!

(Note: None of this advice should be taken as any guarantee that you won't get sick from eating dumpstered food, it's just some sage advice and a little experience from fellow dumpster divers.)