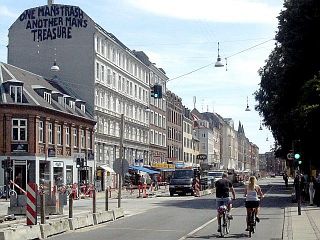 Some freegans managed to make this huge graffiti sign on the house wall in Nørrebro in Copenhagen!

Copenhagen is a capital of Denmark and one of the most generous cities of the world to dumpster dive and find free stuff. 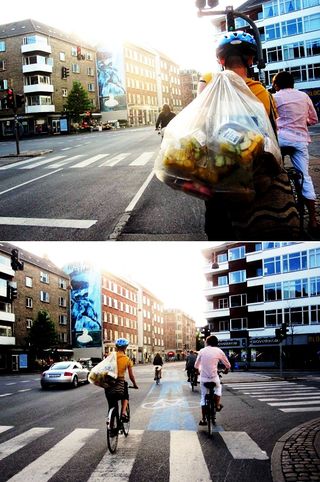 A dumpster diver biking with a day's catch in Copenhagen. 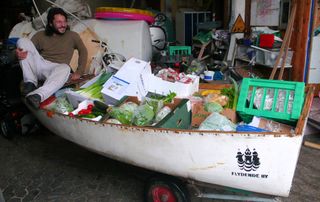 A Floating City trailer loaded with the catch of only one organic food container at 4 PM. 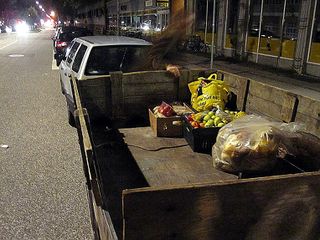 One can get so much stuff while dumpster diving in Copenhagen that it is very convenient to have a car. Here: fruit and veggies picked up from just one place.

You can find a huge variety of food in Copenhagen, whether it is different sorts of fruits and vegetables, or olive oil, or canned tomatoes, pizzas, etc.

There are many good locations. Some of the examples are listed below:

https://www.google.com/maps/d/viewer?mid=zGaQ2fuDrE4A.kgsOBQWSqkfQ&hl=en Here is a map showing the location of a lot of different skips. The explanations are in Danish, but google translate can handle that;)

A grassroots initiative with the goal of organizing redistribution, meaning unconditional sharing, of food waste. We believe that this waste is public property and should be shared in a non-exclusive and non-commercial way. Our initiative is building upon the already existing initiative Foodsharing Germany. It has so far been successful with saving tons and tons of food waste and making it possible for more and more people to involve themselves actively in the issues of wasteflow. Visit their Website for more info about the events (twice weekly as for July 2017) and to sign up as a volunteer ;)

Let's Eat Together Copenhagen Facebook group is the place where to create an event to share your meal (if you have dumspterdived a lot for expemple) or to find events in Copenhagen where to eat togehter.

Electronics, furniture, paint, building materials (wood, insulation, etc.), clothings, books and much more - all this is easily found in dumpsters on the streets or backyards (depending on the local area).

You can find bicycles in around the city. If you have no luck, ask activists from the Floating City (see below) for help. They also have bike workshop (you can come and fix your bike with their tools, get some advice, etc.) and second-hand bike spare parts. 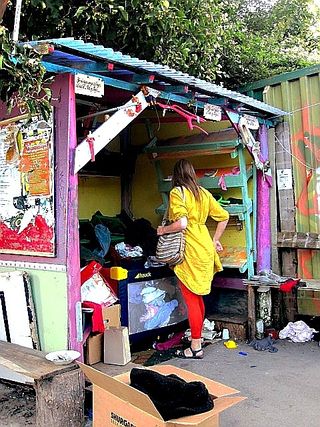 A street freeshop on Pusher street in Christiania, Copenhagen.

A small group of activists in Copenhagen created a project named Flydende By which means Floating City. It is based on a freecycle concept, and basically everything in Floating City comes from a waste. The general idea is to build an independent living area (mostly on water) from the things that others throw away. The activists from the project welcome other people to join them in the struggle for sustainable living and building, against alienating city planning and private ownership. A Floating City is an attempt to create a community/sociaty that is ” separate from the other world”. It is an experiment were alternative and creative ways of living are explored while never forgetting to have fun and the quality of life. You build your own living space, and can create and decide your own way of living. It's an international project, with emphasis on sustainability, and where people get together to form new ideas on how to build and make a community into physical and psychological stronghold of anti-capitalist ideas.

Anyone can join the project and live and work together with other volunteers. Kitchen food usually comes from dumpster diving.

As of 2012, the Floating City is situated around Frederiksholmslobet canal, at Landvindingsgade 16. There is also a freeshop inside, and a bicycle workshop.