Bethlehem, is a city in Pennsylvania, USA. It is located minutes from Allentown, Hellertown and is a short drive to Kintnersville and Ottsville

Place and Events to Check Out

There is a annual music festival in Bethlehem, called Musikfest, that occurs during the first week of August. It features a huge number of musical performers and vendors who sell vast quantities of food, beer/beverages, and the usual tourist stuff. Tickets are required to buy food and most other things, which are very expensive. Scavenging for dropped tickets is always a good idea. Also, when people are leaving they will sometimes have leftover tickets and may be willing to give tickets away to incoming visitors. There are a number of vendors that give out free samples and stuff. At the end of each night and the final end of the festival, people could probably get their hands on some good stuff with enough looking around. Police on foot are high in number so be ready for possible interactions.

There are some small delis, restaurants and even a few bookstores in Bethlehem, a number of said places located on Main Street near West Market Street. Uncertain of what is obtainable, the one bookstore, New Street Book Shop sells a lot of used books and it's very possible they would throw out the really beat up books. 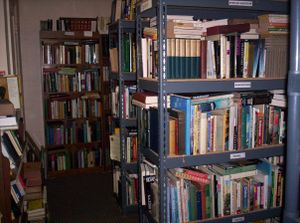 One section of New Street Book Shop, in Bethlehem

On Musikfest...I was able to find enough tickets to get sandwiches and beverages each of the three years that I went. During one excursion I was handed about $9 worth of tickets. I was able to find single tickets here and there that had slid under tables and other places that tickets like to get lost in. People also throw out a plethora of half-eaten food like ears of corn and turkey legs and half-finished drinks... -jtredd