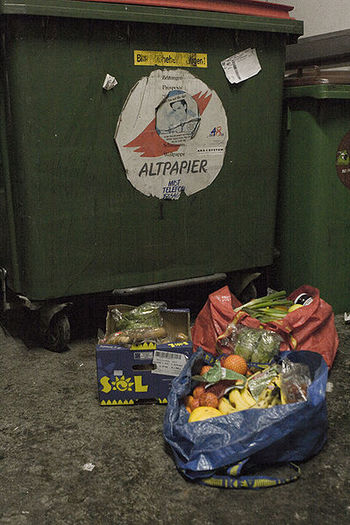 Austria is a country in Central Europe.

Although no longer uncommon in Vienna, dumpster diving is not a well known activity in rural Austria. Most waste in the country (even separated recycleables) is burned in (high-tech) facilities to produce heat and power. For this reason trash is not as big of an issue as is in many other countries.

In March 2009, there was an instance of poison being poured on to the food in the dumpster that belongs to a Hofer store in southern Vienna. Since some time the trash of almost all Hofer stores is effectively locked in outdoor cages.

In Austrian society, wasting food is considered a faux-pas, so there is a wide public acceptance of acts of extracting edible food out of the bins and dumpsters (even respect).

Recently, supermarkets started giving the expired food to so called "Social Markets" (Somas), where these expired grocery products are actually sold to people living below the existential minimum (which is appr. 700€ as of 2010). That's why less food ends up in dumpsters - public pressure through wide media coverage (ATV, ORF, OKTO TV, local radio stations) contributes to that.

Legality is a bit in the grey area. Generally, it is legal except when forbidden by a local law. Extracting goods out of dumpsters is not a crime, according to OGH (Highest Court of Austria). However, because of associations with poverty, some supermarket owners decided to lock their dumpsters or set up gates for protection from divers. In these cases, dumpster diving may be interpreted as illegal.

Most people dumpster dive quetly and when not in sight. Neighbors and/or police might by curious about your nocturnal activities, so take a valid ID just in case.

Short films about freegans and dumpster diving in Austria: