Amsterdam, the capital of the Netherlands, is a nice city for finding free food and stuff.

When you go to the market around its closing time you can generally find sufficient amounts of food or second hand stuff (clothes, books, etc.) vendors leave behind. You can also ask vendors if they have any leftover produce. Sometimes they leave quite some amounts of food just on the pavement or inside the containers behind their booths. At times, it is better to wait until vendors leave, although some freegan-oriented folks tend to build a special relation with certain vendors. There is always a lot of good food left behind on Mondays and Saturdays. 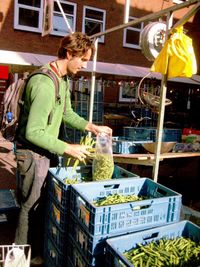 There are several daily markets, and two organic markets on Saturdays. 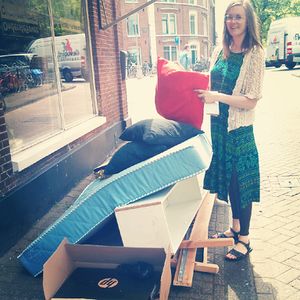 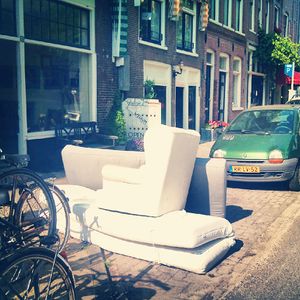 "Trash" in Amsterdam. Choose your furniture, for free!

Each neighborhood has a specific day when it is allowed to put discarded bulky items and other similar garbage out on the street. People put out literally everything, from huge furniture to ovens and all sorts of devices and other handy things meant for the household which means it is possible to gather enough of furniture for an appartment with some luck. Best time to search is in the evenings, especially in areas that are being renovated. You'll also find that there are people who are actually collecting stuff so that they could sell it later on in someplace elsewhere. According to some, best areas to do discarded stuff picking are Pijp and Oud-Zuid. General information about trash in Amsterdam can be found here.

Good trash days are (all maps in Dutch, although they display color-coded areas with a list of trash days below note: links need updating due to restructuring of city-councils):

You can go to any bakery around closing time (5 or 6 pm) and ask if they have leftovers. If they are willing to give their bread away, you can often build relationships with them and come back every (other) day. You will find many bakeries happy that they can give the food away that they otherwise have to throw out. If they give you more than you need, share it with friends.

If your Dutch is limited, keep in mind that it is uncommon for Dutch to know the English word "leftovers". You can use the word "restjes" (sounds like "rest-juice"), which is a diminutive form of the word "remainder" (or "rest") and so translates as "remainderlings". Another practical phrase is "Oud brood" which means "old bread".

Hotels frequently have buffets, leftovers of which they're legally required to toss out at the end of the day. Employees, luckily, are usually amenable to give some food away.

Freeshops are places where you can find stuff for free, or leave what you don't use anymore. Here is the list of freeshops in Amsterdam:

Supermarkets are generally good for dumpster diving, although many - such as "Albert Heijn" - are actually sending most of the unsold food back with their trucks, so there isn't much to dive there.

There are reports of dumpsters found on the street on specific days at specific times. If you have a supermarket in your area, go and check at random times to find out. The trick is that twice a week all the shops in a specific area put their dumpsters outside to get emptied by the garbage collection trucks. The days vary by area in the city. As a guideline you can check the maps in the Garbage section of this page to see how the areas are split. For example, in Bos en Lommer they are Tuesday and Friday. On those days before 12 mid-day you can find dumpsters outside on the streets. Also shops such as the Blokker throw (very useful) stuff away.

Smaller supermarkets also have dumpsters, such as Turkish neighborhood shops. Many of these dumpsters can be found out on the street after closure times. Some days they are full while other days they remain empty.

If you go to the KvK (Kamer van Koophandel (Chamber of commerce)) behind Centraal Station, you say you want to open your own business, they give you a number and you have access to the lobby, with free coffee machine and computers with internet. Conveniently located and with a nice view of the IJ River!

Pharmacies are worth checking out during garbage days. A medium sized pharmacy right at the corner of bestevaerstraat and Jan Van Galenstraat yielded a constant flow of cosmetics, toiletries and even some food and over the counter medicine.

The Voedselbank gets leftovers from supermarkets and distributes them to people with who are officially under a local poverty level limit. Curiously enough, even Voedselbank itself have leftovers - that leaves you a possibility to go there and ask for leftover food (just go to their shop on Friday and ask them very politely).

If you want to carry a lot of things in one go, a Bakfiets comes in handy.

Started up by the group FoAM, the Urban Edibles site maps out wild food sources in Amsterdam.

The ethics of urban foraging:

Feel free to add your own discoveries as well!

Another directory and portable application is Boskoi.

Free State SWOMP is an ecological squatted garden in De Pijp area of Amsterdam. They experiment with permaculture practices, while growing herbs, vegetables and fruits. They also hold various workshops in composting (which every conscious dumpster diver is aware of), arts and crafts, Transition Towns and vertical gardening to mention a few. Check Free State SWOMP in English but bare in mind that it is updated less often. And visit them to get your own plot of land to cultivate.