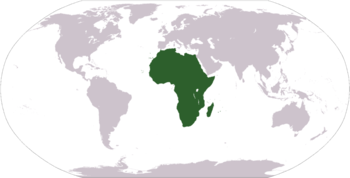 Africa is the world's second-largest and second most-populous continent, after Asia.

Dumpster diving is mostly seen as an activity for people in affluent countries - of which there are none in Africa. However, Africa is probably the continent with the least (own) waste. (A lot of waste from other countries is "exported" to Africa.) Many people live off of scraps found in trash, and in many ways recycling is taken to an extreme.